Bitcoin has plunged 14% in the past 24 hours and the bears are out in force. But if you step back to get a little perspective all signs suggest Bitcoin is about to hit a new all-time high.

The crypto market is fundamentally irrational. There was no good reason the Fear and Greed Index hit 84 – extreme greed – last week, and there’s even less reason the index touched 16 – extreme fear – yesterday.

But the Fear and Greed Index is a great way to identify buying opportunities.

“Crypto market behavior is very emotional,” the site explains. “People tend to get greedy when the market is rising which results in FOMO (Fear of missing out). Also, people often sell their coins in irrational reaction of seeing red numbers.”

It goes on to say that the index is based on a couple of simple assumptions:

“Extreme fear can be a sign that investors are too worried. That could be a buying opportunity.

“When investors are getting too greedy, that means the market is due for a correction.”

Here are ten more reasons not to freak out over the latest Bitcoin price dip.

1. The trend is ever upwards.

Forget about what is happening today, or yesterday or even last week. Just like individual poll results don’t predict who will win the election, neither does temporary price movements.

You gotta look at the trend, which has been relentlessly upwards for months. Of course, it’s possible that Bitcoin has peaked, but it’s not the most likely option.

This is the $BTC weekly chart. We have been in a parabolic uptrend. Price went up a few hundred percent. That is represented in the blue box. The red box is the part of the chart that is sending everyone into a panic. Does this look so bad to you? pic.twitter.com/d45sGJET4i

2. Everyone in the US Government is talking about Bitcoin

The President, the Secretary of the Treasury, the head of the Federal Reserve have all weighed in on Bitcoin and guess what? They don’t like it, but they HATE Facebook’s Libra Coin much more.

The fact everyone’s talking about Bitcoin is only increasing awareness and making it more mainstream.

It’s not great news for altcoins, but Bitcoin’s market dominance hit 69.75% yesterday, equaling the peak in early December 2017 when the market was heading towards an all-time high.

It’s only been higher in July 2017, when Bitcoin was essentially the only game in town.

As veteran trader Peter Brandt has pointed out, Bitcoin has endured much worse pull backs.

5. John McAfee is still all in

Fair enough, McAfee is a total lunatic. But he made a good point on Twitter two days ago that the short term trend is meaningless.

“Why do you pay attention to weekly fluctuations? Look at the past few months FFS! It’s rising drastically. I’m still positive about my $1 mil BTC price by the end of 2020,” he said.

Remember that McAfee has promised to eat his own d*ck if the Bitcoin price doesn’t top a million next year.

Bitcoin is at the mid 10's and people worry. LMFAO!! Why do you pay attention to weekly fluctuations? Look at the past few months FFS! It's rising drastically. I'm still positive about my $1 mil BTC price by the end of 2020. Alt coins like MTC and Apollo will rise ten times more.

6. The realized market cap is at an all-time high

The realized cap takes the price at which Bitcoin last switched hands and then multiplies that by the number of coins involved in each trade. 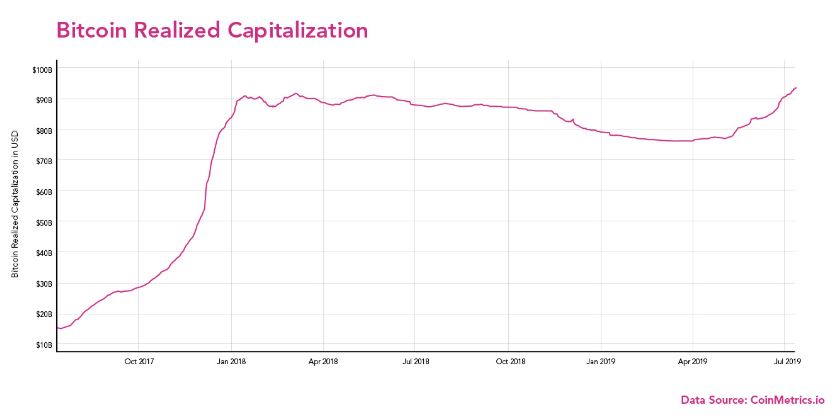 7. The Mayer Multiple is flashing ‘buy’

The Mayer Multiple was created by Trace Mayer and it is the multiple of the current Bitcoin price over the 200-day moving average.

Back testing has shown the best long term results have been achieved by accumulating Bitcoin whenever the multiple was below 2.4. It is currently at 1.6. (Obviously, past performance is no guarantee of future performance.)

8. Everyone is suddenly talking about Bitcoin heading lower. Be greedy when others are fearful.

Nobody in crypto likes Warren Buffett. But the man is an investing genius and one of his maxims is to do precisely the opposite of what everyone else is doing to make money.

This has been an integral part of Buffett’s rise from a man worth zero to a man worth $85 billion.

The hash rate means miners are throwing more resources into mining blocks in expectation of a Bitcoin price rise.

Plus there are rumors miners are hoarding Bitcoin because they think the price will spike in the lead up to the halving in May next year.

Fundstrat’s Tom Lee believes that the President, Congress and Federal Reserve taking aim at Bitcoin this week is a good thing, as it pushes BTC on to the “main stage”.

He also predicts Bitcoin is heading to $40,000 later this year:

“Bitcoin is now trading at a level it has only seen 3% of its historical days.

“So if you go back to every milestone that was achieved, Bitcoin subsequently rallied somewhere between 200-400% within the next four months.