343 Industries continues to slam down false rumors that loom Halo Infinite. The recent leak led the devs to speak up, hinting a very close release of the high-anticipated game title.

Halo Infinite continues to be the center of the rumor mill buzz as its fans eagerly await its imminent release. The recent alleged leak, however, has resulted in 343 Industries finally speaking up.

A recent Reddit post reportedly claims “spoiler details” about the Halo Infinite campaign and multiplayer gameplay. As of this writing, the post has been tagged as unverified following the statement of Community manager John Junyszek.

Junyszek took it to Twitter recently to slam down the said Reddit Halo leak. He reminds the avid followers of the game franchise to only trust the information relayed by the official Halo channels.

343 Industries dev also asked everyone to “hang in there,” hinting that the Halo Infinite release is “close.”

Since today's @RedditHalo 'leak' admitted to being fake, please remember to only trust messaging from official @Halo channels. We're close, just hang in there ???? pic.twitter.com/yeMPwdx7LW

As Micky News previously reported, Xbox executive Aaron Greenberg has recently shed some light on the matter, saying that the development is right on track and that the devs at 343 Industries are “cooking up ‘something’ that is worthy of the wait.”

As media outlets have pointed in the past, Microsoft will further discuss the development of the next Halo title during the Xbox 20/20 event this July—after the E3 2020 cancelation.

Taking in what Junyszek meant by “we’re close,” fans might see a July release. If not, then everyone is likely to witness the release of the most-awaited title as a combo with Xbox Series X that’s penned in for the fourth quarter of this year.

What was the leak all about?

As for those who weren’t aware of the Reddit leak, and could no longer catch up to view it as it has since been deleted by the moderators following the admission of the “leaker” himself that the “spoiler” was indeed false.

One of the moderators recently commented that “as an update for posterity, the ‘leaker’ himself has admitted they’re fake in a DM he sent to a 343 employee. Removing these leak threads.” 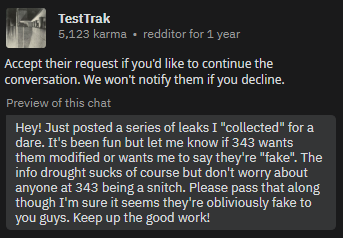 The supposed “insider tip” was about Halo Infinite being an “open-world shooter.” It made further claims that the game is set to introduce “four large open-world segments,” not to mention a vehicle-based menu.

It also talked about the “crunch culture” over at 343 Industries, and how Microsoft has pressured everyone to make sure everything runs smoothly together with the release of the Xbox Series X.

Fans have turned to believe every rumor that surfaces due to the “information drought” brought by Microsoft and its game developers. But as always, rumors should always be taken with a grain of salt.