Angelina Jolie, allegedly, walked out on Brad Pitt years ago after learning that he tried to have a baby with his ex-wife, Jennifer Aniston.

According to Star, Angelina Jolie was enraged when she found out about Pitt’s previous plans.

“A fuming Angelina Jolie stormed out after a huge blowup with Brad Pitt when she learned the bombshell news that he had tried to have a baby with another woman – his ex-wife, Jennifer Aniston,” a source said.

The insider went on to say that Jolie felt betrayed by Pitt because he never told her that he tried to have a baby with Aniston. However, the Friends star, allegedly, suffered a miscarriage.

“She had assumed all along that she was the only woman Brad had ever impregnated. Now Angie is questioning everything, including whether she can ever trust Brad again. Betrayed and shaken, she walked out and left Brad with the children,” the source said.

Eight years have passed and the claims made by the tabloid are still incorrect. Jolie never walked out on Pitt at that time because their divorce took place in 2016.

Pitt never got Aniston pregnant while they were married. And The Morning Show star didn’t suffer a miscarriage. 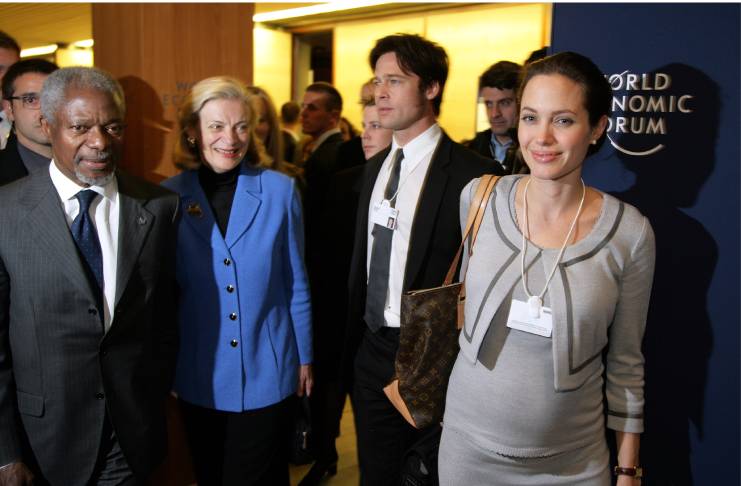 Jennifer Aniston’s thoughts on having kids

Following their divorce, rumors swirled that Pitt and Aniston split because the latter didn’t want to have kids. And the speculations became rifer after Pitt had six children with Angelina Jolie.

While speaking with Vanity Fair, Aniston clarified her statements about having kids.

“I’ve never in my life said I didn’t want to have children. I did and I do and I will. The women that inspire me are the ones who have careers and children; why would I want to limit myself?” she said.

Three years later, Aniston once again said that she will have children in the future. But in 2018, the actress admitted that the thought of becoming a mom is frightening for her.

Meanwhile, Jolie and Pitt’s relationship has improved in recent years. A source told Us Weekly that the A-lister’s are now on cordial terms following their highly-publicized custody battle.

“Things between Brad and Angelina are better than they have been. They’re more cordial—they’re aiming toward resolutions that work for each of them,” the source said.

Pitt is also spending as much time as he can with his kids. But Maddox, Pax, Zahara, Shiloh, Vivienne, and Knox are all living with Angelina Jolie.