For those that love completing Blathers’ museum in Animal Crossing: New Horizons, it’s important to know what bugs and fishes can be caught for a particular month. The developer has made it so that some creatures appear only at a certain time. Here are some creatures players should look for before they disappear come May.

For those in the Northern Hemisphere, the notorious tarantula will be off their islands until later this year. This bug can be caught between 7 pm to 4 am, and they can be caught anywhere on the island. 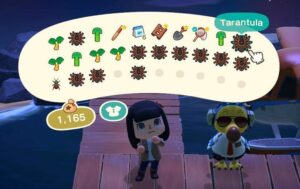 Those in the Southern Hemisphere will have to work harder.

Let’s first talk about bugs found in the flowers. Leaving the island this April is the ladybug caught from 8 am to 5 pm, man-faced stink bug from 7 pm to 8 am, Mantis from 8 am to 5 pm, and the Stinkbug which can be caught all day.

For the flying bugs, players should catch the darner dragonfly between 8 am to 5 pm, red dragonfly from 8 am to 7 pm, and the yellow butterfly from 4 am to 7 pm.

Those in the Northern Hemisphere will have to grind for three fishes only. The fishes saying goodbye are the pier inhabitants tuna and blue marlin, and the last is the dab, which can be caught in the ocean. All fishes are available to catch all day.

Again, those playing in the Southern Hemisphere will have to work a lot harder.

There’s only one pond fish that’s leaving the game momentarily, and that’s the catfish, which can be caught from 4 pm to 9 am.

There are two ocean fishes leaving this April. They are the moray eel and the ribbon eel, which can be caught at any time of the day.

These bugs and fishes may be leaving, but they’ll be replaced by some new creatures in Animal Crossing: New Horizons next month. Those who missed out on them don’t have to worry as they’ll be back some time this year.