The Asia Pacific markets experienced little change on Thursday, May 7, despite China exceeding expectations regarding its April exports.

With the resumption of trading in most Asia Pacific regions, market performance today has been dull.

Stocks in the Asia Pacific had very little change, ranging from day changes between -0.01% and 0.28%, with Japan’s Nikkei 225 leading the pack gaining 55.42 points.

Triggering the slight increase in Japan’s index were shares of Tokyo Electron jumping 3.16%. Also, remdesivir is set to be approved in Japan during its health ministry’s review board this week.

Overall, the MSCI Asia ex-Japan index declined by 0.32% while markets in Singapore, Malaysia, and Indonesia were closed on Thursday for holidays.

In recent data released by the General Administration of Customs, China’s exports rose 3.5% while imports fell -14.2%.

This beat a Reuters economist poll, which expected Chinese imports and exports to fall 11.2% and 15.7%, respectively. 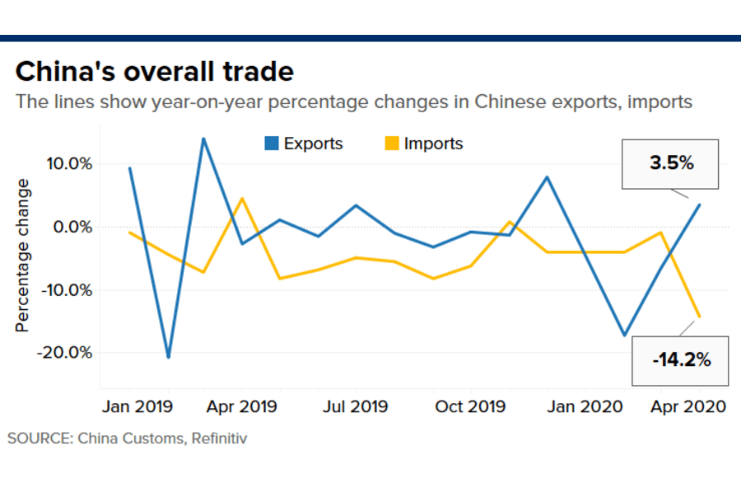 Before the data was even released, Liu Li-gang, chief economist for China at Citygroup, expected the country’s medical exports to grow in April as it sent goods to the rest of the world.

In addition, Julian Evans-Pritchard, senior China economist at Capital Economics says that global demand will likely remain weak for the next months.

It seems that the recent developments in the Asia Pacific region are also affecting the U.S. markets.

In a phone interview at CNBC’s Trading Nation, Yale University senior fellow Stephen Roach warns the global economy on the demand side is struggling.

He also claims that Chinese consumer behavior is different from Americans while the U.S. tries to re-open its economy as he adds:

“Chinese consumers remain fearful of going out in public, shopping, going to movies and enjoying activities that put them in close proximity with their neighbors […] Consumer behavior is not all that dissimilar in populations subjected to an unprecedented shock in their health security.”

Roach also warned about a global recession as early as January amid the coronavirus outbreak and yet, some U.S. stocks continued to hit new highs through February.

He also claims that this will not be an easy economic recovery as the next jobless claims report will most likely hit new highs again.

Asia Pacific markets may react again once the final jobless claims report of the U.S. has been released.

Unless new developments about a new coronavirus vaccine are released, this recovery could take longer than expected.