Home Gaming ‘Assassin’s Creed Valhalla’: gameplay, release, and everything else you need to know

Ubisoft has unveiled Assassin’s Creed Valhalla, and aside from the fact it will be all about Vikings, here are all the details known so far about the upcoming game.

The next installment of the hit game franchise Assassin’s Creed is finally coming. This time, players will get to explore the world of assassin Vikings (don’t laugh) during the 9th century. Here are all the details known about Assassin’s Creed Valhalla so far.

Ubisoft has not really given much detail on when the upcoming game will arrive. In the game’s first trailer, the statement “holiday 2020” was specifically mentioned. This would no doubt be a release window for Valhalla, but it’s also quite vague.

Holiday 2020 could begin on Thanksgiving in November, leading up to the Christmas season in December. However, previous installments had favored an October release, so it is also possible that the game would follow the same pattern.

The game will be released across multiple platforms, namely the PS4, Xbox One, PC, and Stadia. Furthermore, Assassin’s Creed Valhalla will also be released on the upcoming next-generation consoles, the PS5, and the Xbox Series X.

Interestingly, both next-gen consoles are also set to be released during the holiday season this 2020.

Ubisoft will be offering next-gen upgrades for the game for Xbox One users through the Microsoft Smart Delivery Service. The company will also make the game available on its UPLAY+ subscription service.

In Valhalla, players will take on the character of Eivor, a Viking warrior and leader of his clan. The trailer shows the character to be male, but the game provides male and female protagonist options for players to choose from. 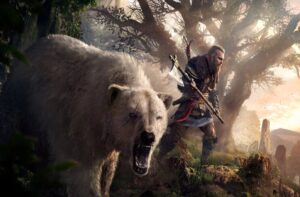 While there won’t be a full-blown character customization feature, players would still be able to slightly change Eivor’s appearance, particularly with the hairstyle, facial hair (male), war paints and tattoos.

Ubisoft itself has confirmed that Magnus Bruun of The Last Kingdom on Netflix will voice the male version of Eivor. The female version will be voiced by Cecilie Stenspil. There will also be a raven character that serves as the protagonist’s guide.

For #AssassinsCreedValhalla here are our phenomenal leads, Female and Male Eivor ????❤️

The role of voice actors has become more important in Assassin’s Creed when it adapted role-playing game elements in the previous Odyssey installment.

Now, Ubisoft has revealed that Valhalla will also adapt the same RPG elements. This means that branching dialogue and player choices will play a bigger role in the game’s outcome.

Assassin’s Creed: Valhalla will be set in the 9th century, beginning in the year 873. Eivor and his clan had departed his homeland of Norway in order to start a new life in England. Unfortunately, the journey won’t be easy as both Vikings and Saxons pose a threat.

The game’s first trailer had featured a notable historical figure. The trailer shows King Alfred the Great of Wessex, sending his soldiers to fight the Viking invaders. Historically, many might consider this as accurate. King Alfred had been known to battle the Vikings during his time.

The Vikings were also notorious for trying and succeeding in conquering parts of England over a thousand years ago.

Valhalla will make full use of the so-called advanced RPG mechanics, and just like Odyssey, it will have romance features. However, while romance options are available, it’s still a question whether it is applicable to everyone despite the gender.

There will be lots of blood. The trailer itself features an intense battle, and Assassin’s Creed won’t be what it is today without the violence. It won’t be a Viking-based game if there isn’t even a river of blood and ample amounts of brutality.

Ashraf Ismail, the game’s creative director, says players can expect raids and large-scale battles in Valhalla. Ubisoft has added large and heavily-armored Saxon warriors who would take more effort to kill than the average grunt.

Dual wielding is still a major combat skill, and Eivor could basically dual-wield any weapons he would like. Instead of throwing knives, there will be throwing axes (typical Viking).

Build and manage your own settlement

Because Eivor is the leader of his clan, players have the responsibility of building and managing a settlement for them. The choices made by players will not just affect the game’s outcome but also the settlement and its people.

Valhalla will be a solo-player game, and Ubisoft has not expressed a desire to launch a multiplayer co-op feature as of yet.

There is a promotional picture of Assassin’s Creed: Valhalla showing the main character standing next to a large bear. Animal taming was a popular feature in both Odyssey and Origins. This makes it likely that the feature would go over to Valhalla as well.

Steam launch is a negative

Ubisoft has revealed that the game will be available on PC only on the Epic Games Store and on Uplay. As it stands, Ubisoft hasn’t confirmed any plans for a Steam launch, and it’s also not likely to happen with the company’s exclusive partnership with Epic Games.

Not exactly an assassin?

Eivor will have his own “hidden blade” in Valhalla, but that doesn’t mean he’s an assassin. He will work with the assassins in the game, possibly because their goals are in line with each other. However, it’s still unclear whether he would become part of the order himself.

The character itself doesn’t know much about the order, but in the beginning, he will work with them. In fact, his hidden blade is not actually “hidden” as it will be placed on top of his wrist. The reason being that he doesn’t see a reason to hide such a good weapon.

However, he did become an assassin in the future, heading the brotherhood in London. It would be interesting to know if Eivor will follow the same path in Assassin’s Creed Valhalla.

China: The first major economy to recover from pandemic