Customers of an Australian crypto exchange fear for their holdings after the exchange suspended services for the second time in six months following a “substantial loss”.

UPDATED 8.56PM myCryptoWallet CEO, Jaryd Koenigsmann got in touch via email earlier this evening and we’ve updated the story with his comments.

The myCryptoWallet cryptocurrency exchange informed customers two days ago it had been forced to “limit” withdrawals and suspend its myCryptoCard program after its “deposit technology partner” abruptly terminated its contract.

At the same time, the exchange has also limited the number of hours its customer support team are working – leaving some customers fuming over delays in responses to support requests.

This marks the second time this year that myCryptoWallet has been forced to suspend withdrawals in similar circumstances after the National Australia Bank suddenly closed its bank accounts in January. They were restored soon after.

In this latest incident, the exchange emailed users informing them of the suspension of services on July 9, explaining it was heavily reliant on a third-party provider that terminated its contract on July 5.

Email says the suspension is temporary

“Sadly our deposit technology partners ignored calls from our CEO regarding users deposits that hadn’t cleared to myCryptoWallet’s bank account,” the email said.

“We received a response from our deposits technology partner after business hours on Friday the 5th of July which was a terminated contract and left myCryptoWallet at a substantial loss.

“Due to this loss we will be discontinuing our myCryptoCard program and our withdrawals will be limited over the next few weeks until we are able to clear this issue.”

On Twitter, customers have complained of being unable to make withdrawals for some time – with one user claiming the issue stretched back to May.

@mycryptowallet seems like you guys have been having withdrawal issues since may 2019. I have been waiting for my withdrawal for more than a week now. When is this going to be sorted?

CEO gives his take on the issues

CEO Jaryd Koenigsmann told Micky.com.au he was limited in what he could reveal publicly about the reasons behind the unexpected contract termination.

“For legal reasons we cannot provide the information at this point in time as we are still within a termination period via their contract,” he said.

But he added the issue did not relate to one of their banking partners.

“We cannot say (who the deposit payment provider is but) we will have an update soon from our lawyers,” he said.

Asked if the former partner still has users’ deposits and/or funds he responded: “We are unsure where they are as they haven’t been released to us.”

However he expects users will be able to recover their money. “Yes we hope to have our withdrawal situation sorted within a few weeks,” he said.

The card is linked to a user’s wallet on the exchange, with the currency converted into AUD at the time of purchase.

Koenigsmann said the “discontinuing” of the myCryptoCard program was “definitely temporary as we love this free service for our users”. 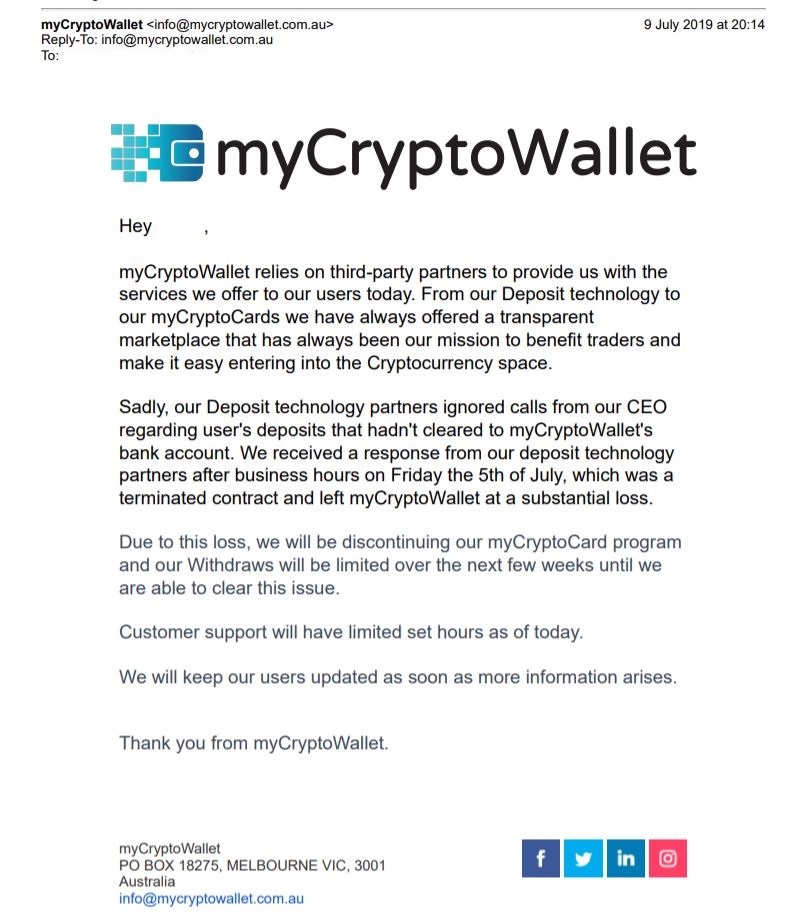 One customer, who wished to remain anonymous, told Micky (prior to the CEO’s statement above) that he hadn’t been concerned during the NAB incident in January, but he was worried he’d lose his funds this time.

“It’s quite worrying really,” he said. “I lost money with (hacked New Zealand exchange) Cryptopia as well and I thought these guys in Australia would be better.

“They have pretty much closed down, they may come back to normal, but didn’t seem like it from the email where it said they had large financial losses

“I don’t care about the card, I just want to transfer my coins into another exchange where I can actually do something.

“I reckon that money’s gone.”

We hope to have all things resumed as normal within a few weeks, we will keep everyone updated as more information arises. Thanks

Micky readers - you can get a 10% discount on trading fees on Binance and FTX when you sign up using the links above.

Paid By Coins: The Fast and Easy Way for Aussies to...

Weak hands: US government lets $1.7b Bitcoin windfall slip through its...

US regulators crack down on crypto scam targeting physicians