Even the Australian Federal Police were surprised by how much they made from their first Bitcoin seizure. But it took them two years to work out.

The AFP’s latest annual report strongly suggests the cops may have got a taste for crypto investment.

Back in January 2016 they charged a man with firearms offences after he imported three illegal firearms from the internet, paying for them in Bitcoin.

The AFP seized – or at least thought it had seized – the man’s Bitcoin stash, which was worth A$7300 at the time of his arrest.

As it happens, they’d only managed to secure his public key, which is about as useful as writing down his email address.

However, after two years of “protracted negotiations” – this guy really did not want to hand over his stack – the man finally agreed to give up his private keys. 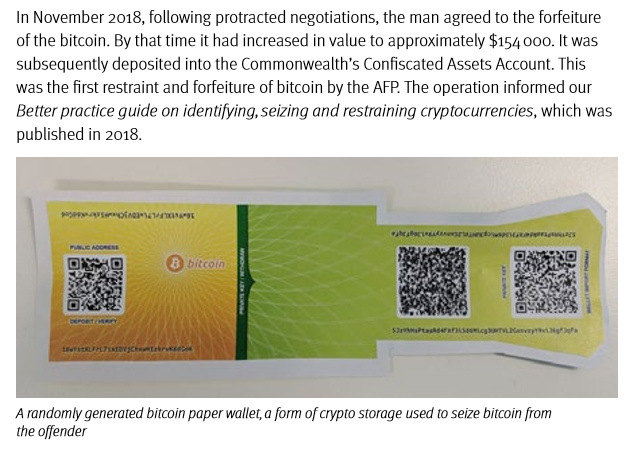 Time is on my side, yes it is

The report is none too clear about whether they worked out how to sell the Bitcoin on an exchange.

It merely says “it” was deposited into the Commonwealth’s Confiscated Assets Account, which is administrated by the Australian Financial Security Authority which also oversees bankruptcies.

If ‘it’ refers to Bitcoin, then perhaps the AFP now has their own wallet and are letting it ride.

If so they’d be up a third this week alone after the weekend’s price spike.

All in all, it was a pretty successful first-ever restraint and forfeiture of Bitcoin for the AFP, and their returns and actions since suggest they’ll be seizing more in future.

The operation “informed” (seems to have inspired) the AFP to write a guide called “Better practice guide on identifying, seizing and restraining cryptocurrencies” published in 2018.

With more cryptocurrencies likely to be seized by the AFP, it may not be long before we see the Australian police auctioning off Bitcoin.

That’s of course, how famed Bitcoin bull Tim Draper amassed the bulk of his Bitcoin.

At the recent CC Forum in London, he told the crowd his friends thought he was crazy for paying $14 over the spot price on exchanges, but the gamble has paid off pretty well.

More recently, the United Kingdom police auctioned off around $370,000 worth of confiscated Bitcoin in its first auction.

The stash had been taken from a criminal who obtained the coins in exchange for hacking and trading in personal data. The auction received 7500 bids from around the world and the UK cops made a tidy profit, selling for above-market rates.

Other police auctions include the US Government auctioning 2700 Bitcoin in August 2017 (some of which was confiscated from Ross Ulbricht when he was prosecuted over the darknet marketplace Silk Road), an auction of 3600 Bitcoin by US Marshalls in January 2018, and another auction in November 2018 of 600 Bitcoin amassed from various federal, civil and administrative cases.
Micky is a news site and does not provide trading, investing, or other financial advice. By using this website, you affirm that you have read and agree to abide by our Terms and Conditions.
Micky readers - you can get a 10% discount on trading fees on FTX and Binance when you sign up using the links above.