Five years after his first film, “Bitcoin: The End of Money As We Know It,” three-time award-winning filmmaker Torsten Hoffmann is back with a new documentary that explores the evolution of Bitcoin and blockchain and its promise of a “better and fairer internet.”

Bitcoin and the crypto industry

Bitcoin is considered to be the technology that will kick-start the next revolution. The largest cryptocurrency is set to disrupt the entire financial infrastructure of the world – at least so say the experts. Most importantly, Bitcoin started a movement.

Alongside Bitcoin, countless other systems and networks have appeared to bring to market decentralized solutions powered in whole or in part by blockchain technology.

These projects, teams, and individual developers work in an open-source environment to bring the world a fairer system and a better Internet, often dubbed Web3.0.

However, as is with every major revolution, it is difficult for the mainstream audience to get a firm grasp of the new paradigm – especially when the space is infiltrated by bad actors as well.

With such a skewed view and misleading interpretations, it can quickly become confusing for the average person. 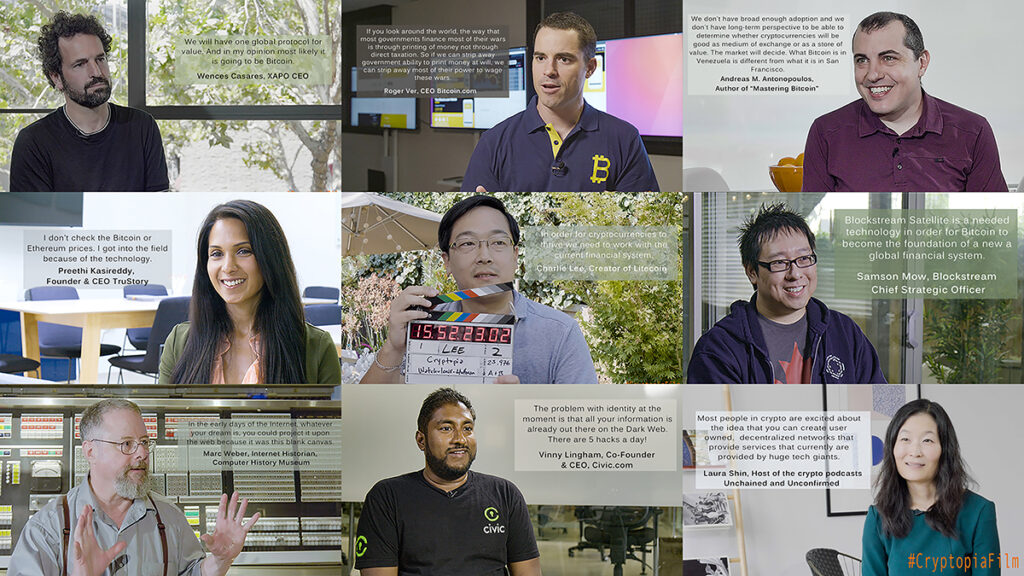 Get to know the faces of the crypto industry

In order to bring the cryptocurrency world closer to the mainstream public, better resources need to be available.

This is what Torsten Hoffmann aims to achieve with his second documentary about the cryptocurrency industry: “Cryptopia: Bitcoin, Blockchains and the Future of the Internet.”

Five years after his first film, Torsten Hoffmann revisits Bitcoin and sets out to explore how the blockchain and cryptocurrency industries have evolved.

In his documentary, Hoffmann introduces and talks to some of the most high-profile names in the industry, including Bitcoin advocate Andreas Antonopoulos, Blockstream CSO Samson Mow, Ethereum co-founder Vitalik Buterin, Litecoin co-founder Charlie Lee, Xapo CEO Wences Casares, and many other industry leaders and influencers.

Plenty of support for #CryptopiaFilm

Torsten Hoffman’s effort was supported by Screen Australia and crowd-funded with the help of a Kickstarter campaign that raised AU$ 44,120 [US$30,000].

Adrian Przelozny, CEO of the Independent Reserve, an Australian cryptocurrency exchange, has expressed his full support for Hoffman’s initiative:

“The theme of this film is Bitcoin, Blockchain and the future of the Internet. The Independent Reserve strongly believes Bitcoin and blockchain will be a ubiquitous part of everyone’s future.”

Hoffman wants to shine a light on the current state of the cryptocurrency industry, help people understand the importance of the movement started by Bitcoin and the ecosystem that was built around it.

Victor Zhang, CEO of AlphaWallet, commended Hoffman’s effort sharing his motivation to educate the mainstream public by sponsoring the endeavor:

“As one of the startups building the global blockchain ecosystem, we are proud to sponsor this exclusive launch event. Our emerging industry needs to reach mainstream users and the documentary #CryptopiaFilm may help to educate a broader audience”

“Cryptopia: Bitcoin, Blockchains and the Future of the Internet” will premiere in Sydney on Monday 21 October as part of the Spark Festival.

For more details about the film – or to purchase tickets – please visit CryptopiaFilm.com and follow #CryptopiaFilm on social media.