Three years ago, President Donald Trump signed his first executive orders and his entire family was there to show him support. Barron Trump, who was just 10 years old at that time, shared an adorable moment with his nephew, Theodore.

Barron attempted to high five Ivanka and Jared Kushner’s son. He also played peek-a-boo with Theodore to keep him entertained at such a formal occasion.

Shortly after the gathering, Ivanka shared the adorable video of her brother with her son laughing at each other.

“My youngest brother proves he’s a baby whisperer – while my father signs his first executive orders,” Ivanka captioned the video.

In 2016, the youngest child of the POTUS also made headlines after he yawned his way through his dad’s victory speech. Barron sat in between his mom, Melania Trump, and his half-sister, Tiffany Trump.

Clips from the president’s victory speech show the young boy stroking his chair, yawning uncontrollably, and fixing his shoes. At one point, Barron also places his arm on his chin, which makes him look extremely bored.

Melania’s only child couldn’t also help but touch his hair while everyone else was clapping the POTUS. Barron Trump also scratched his nose and played with his lips and Tiffany briefly looked at him with a smile. 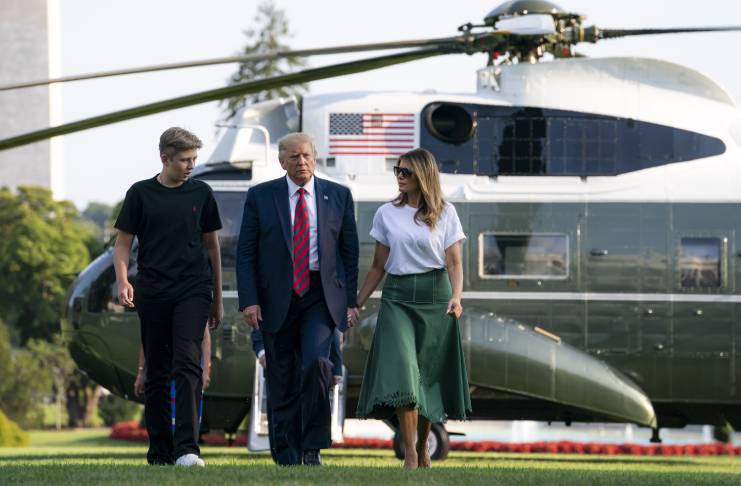 Earlier this year, Barron also became the subject of discussion on Twitter after he stepped out in public with his parents.

Photos of the first family walking across the South Lawn towards Marine One at the White House show how much taller the teenager has become. Barron now stands 6’3”, which makes him taller than his dad.

And since he’s just a teenager, he’s expected to get much taller in the coming years.

Twitter user @iheartmindy gushed at how tall Barron has become. She couldn’t believe that Barron was just a young boy when his dad entered the White House.

“Does the US government have some kind of special growth formula because this is crazy,” he wrote.

However, it is important to note that Barron Trump’s parents are really the POTUS and the FLOTUS.