Blizzard has destroyed the dive meta in the most recent update for Overwatch, but it seems like fans aren’t too happy with the change. The new meta is anti-barrier, and the main tanks are finding it hard to adjust.

The tweaks to Sigma and Orisa have made it harder for shield tanks to do their job on the field in Overwatch. While things have certainly changed, it doesn’t necessarily mean that the shield tanks will longer be usable on the game. In fact, they can still be made useful if they are accompanied by certain supports.

Ana is one of the strongest pocket healers in the game. Her ability to keep a single hero alive makes up for her lack of AoE healing. That being said, she’s going to be formidable support behind tanks like Reinhardt and Orisa.

The main problem, though, is that if the team wants to keep the main tank alive, Ana should focus her healing on a single target only. This means the other support of the team should be someone with AoE healing like Moira and Lucio. With a properly timed Nano-boost, Ana can even help decimate the enemy team with the help of the tank. 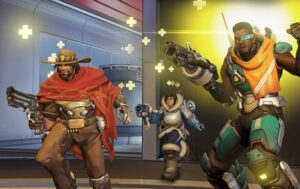 Despite being one of the last support characters to be added to the game, Baptiste is actually a great healer in Overwatch. His secondary attack and healing ability makes him a great support for the anti-barrier meta. Perhaps the best reason why he’s a good support is his Immortality Field.

Now that barriers break a lot faster, teams will need an ability that can help sustain them in the meantime. The immortality field could last long enough to ensure that the team has a barrier during the next round of attacks from the enemy.

Ana and Baptiste are the key heroes to keep the team alive during the new anti-barrier meta. They may not seem much before, but now that shields are much weaker, their capacity to sustain is more needed. Support players should master these two heroes as they are going to be the better picks from now on.

The meta in Overwatch has changed dramatically since the recent update. It’s going to be tough to adjust for now, but eventually, players will get used to the changes. It’s important to keep Ana and Baptiste in mind during the next time players play.