Code changes to Binance’s API appear to indicate that margin trading on the exchange could be very close at hand.

Binance, one of the world’s largest and most popular cryptocurrency exchanges, appears to have enabled margin trading for several of its trading pairs, according to a recent Reddit post.

Redditor lifofifo posted yesterday that an analysis of Binance’s API revealed that margin trading had been switched on for nine trading pairs:

To avoid any confusion, it is important to note that merely enabling margin trading in the Binance API does not mean that it is available to traders on the platform.

Coupled with other recent changes to the API as well as a cryptic tweet from Binance CEO Changpeng Zhao, however, it does seem to point to margin trading being rolled out sooner rather than later.

In March of this year, the crypto community began speculating that Binance was preparing to launch margin trading after Redditor enriquejr99 noticed that two new lines of code had been added to every trading pair in Binance’s API.

Short for Application Programming Interface, the API is a toolkit – a set of functions and processes that allows developers to create applications that can access and incorporate Binance data and services.

For each trading pair on the exchange, the API contains code that determines what types of orders can and cannot be placed with that pair.

Here is a snippet of the original API code for the ETHBTC trading pair:

As you can see, iceberg order functionality has been added for the ETHBTC trading pair but have not yet been turned on.

When enriquejr99 looked at the same API code on March 19th, he noticed the addition of two new booleans – isSpotTradingAllowed and isMarginTradingAllowed:

In addition to iceberg orders, it appeared that spot trading and margin trading had both been added but not yet enabled.

While the API update caused many in the crypto community to speculate that Binance was preparing to launch margin trading, Zhao laid those rumors to rest:

We future proof our API framework as part of our system upgrades. No dates. https://t.co/8PxaeT98vH

In the wake of lifofifo’s announcement, a quick search of the current version of Binance’s API does appear to support his claims: 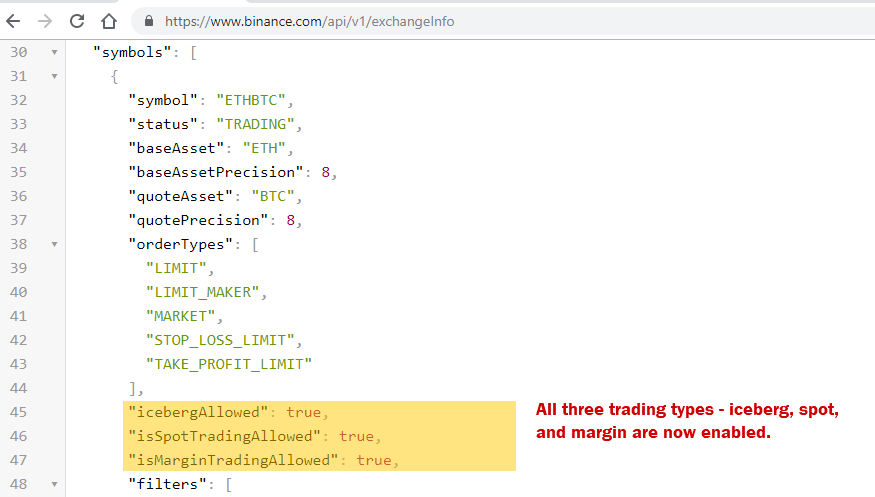 Margin trading, as well as spot trading and iceberg orders, now appear to be enabled, though not yet available to customers of the exchange.

While Binance has yet to release a statement on the issue, Zhao posted a rather enigmatic tweet earlier today, neither confirming nor denying the addition of margin trading:

Whether or not Binance plans to roll out margin trading anytime soon, the market appears to be reacting favorably to the possibility as almost all of the cryptocurrencies in the flagged trading pairs are posting gains over the past 24 hours according to CoinMarketCap.

Binance Coin (BNB) showed the highest gains, climbing nearly five percent in the twelve hours following lifofifo’s post. It jumped a further 4.35% in the wake of Zhao’s tweet and is currently trading at $23.58.

Leyou Technologies now has an agreement with Tencent