A screenshot of a Reddit user receiving a Bitcoin tip six years ago has garnered a lot of attention, serving as a reminder of how far Bitcoin – which was worth roughly $27 at the time – has come.

Posted by Loulauman, the transaction shows fellow redditor Namatura receiving a single bitcoin tip from shakethatbass through a tipbot for what appears to be commentary on Forrest Gump. 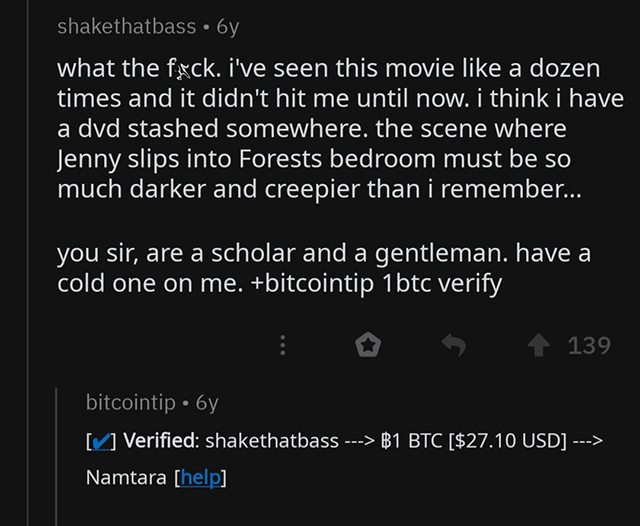 The value of the tip at the time was just $27.10, meaning that the transaction likely took place sometime in the first quarter of 2013.

Not bad for someone making a clever observation about a movie.

Sadly, the days of Bitcoin being handed out like candy are long gone. Every now and then the community gets all atwitter (no pun intended) over a random generous tip or donation, but those are few and far between.

But once upon a time, before its value exploded, free bitcoins were relatively easy to come by through faucets, games, and people who were just trying to spread the word about Bitcoin.

One commenter recalled a faucet developed up by Gavin Andresen, who worked alongside the enigmatic Satoshi Nakamoto on the Bitcoin project.

The aptly named Bitcoin Faucet, which Andresen launched in 2010, dispensed five bitcoins per claim. All users had to do was provide a legitimate e-mail address and complete a captcha.

Satoshi himself weighed in on Andresen’s faucet, saying:

“Excellent choice of a first project, nice work. I had planned to do this exact thing if someone else didn’t do it, so when it gets too hard for mortals to generate 50BTC, new users could get some coins to play with right away.”

Before the end of its run, the faucet had dispensed more than 19,700 BTC to visitors – that’s nearly $200 million at today’s prices.

While Andresen’s faucet shut down in 2012, there are many Bitcoin faucets – and faucets for other cryptocurrencies – still in operation, though they mostly pay out a few hundred satoshis at a time.

…But you’ve still got a long way to go

Bitcoin has died and come back from the dead more than 350 times.

After the last crash, there were a lot of naysayers who were convinced that it was just a matter of time before Bitcoin dwindled away, but here we are and Bitcoin is still going strong.

Six years from now, we could be looking at a screenshot of a 0.0027 BTC tip and thinking, “I wonder if he held onto it?”

What will that tip be worth then?