The head of Grayscale says $68 trillion of wealth is being handed to millennials – and there’s already data they’re spending it on Bitcoin.

The managing director of Grayscale Investments Michael Sonnenshein has told Yahoo Finance that $68 trillion of wealth is set to be handed down to millennials as their baby boomer parents go the great gig in the sky.

He said evidence already showed that cryptocurrency is already one of the generation’s favourite investments – and that was only likely to continue.

“That’s where the puck is going,” he said.

“There are a lot of folks, and the narrative that has resonated on Wall street is around Bitcoin becoming digital gold or a digital store of value,” Sonnenshein said.

“And this is a conversation we’re having quite often – this generational wealth transfer, the $68 trillion of wealth being transferred down to millennials over the next 25 years.

“That’s a lot of capital and whether today it’s invested in gold or other kinds of investments we have to be paying attention to how that investment capital is going to be redeployed as it gets passed down.”

“We’re really drilling down into what that means, and we’re certainly not saying all of that capital is flowing into Bitcoin, but we certainly say it’s going to resonate with the millennial audience.”

Sonnenshein pointed to Charles Schwab’s SDBA Indicators Report that came out this week and showed the Grayscale Bitcoin Trust is the fifth most popular equity holding for Millennials. 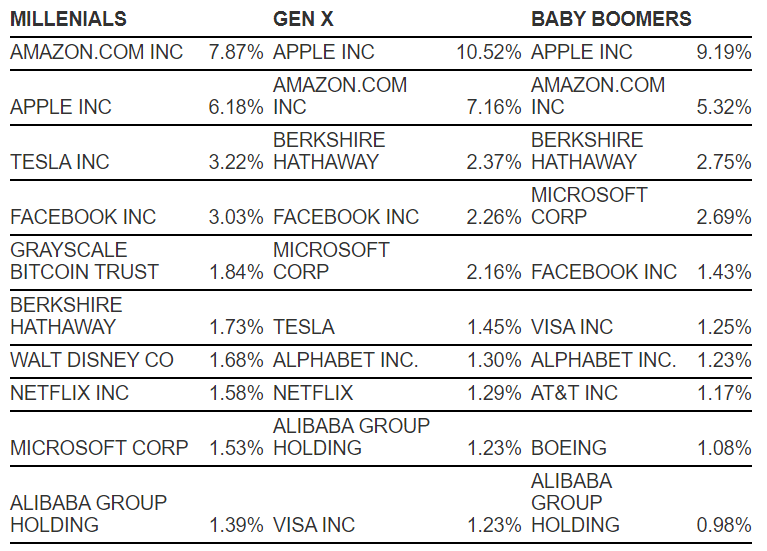 While Grayscale’s Bitcoin Trust isn’t on the top ten investment lists for either Gen X or Baby Boomers, it’s more popular with millennials than Disney, Netflix, and Microsoft.

“So we’re already getting that empirical data showing that’s where the puck is going and that’s what investors need to be paying attention to that,” Sonnenshein said.

It shows the potential for A LOT of money to be potentially tipped into crypto.

A Forbes study found that while just 2% of Boomers aged 65 and over had cryptocurrency investment, one in five millennials do.

The majority of millennials in the US believe everyone will use Bitcoin in 10 years’ time and many pundits believe millennials are a lot more receptive to the ‘digital gold’ message than their gold loving parents and grandparents.

Independent Reserve’s recently released IRCI research study found that within five years the majority of millennials and Gen Z could own crypto.

More than 50% of them also believe crypto will become widely accepted by people and businesses and a third of them say it’s likely they’ll invest in crypto for their retirement.

Highlight: “About 21 million investors in the U.S. would have an interest in investing in bitcoin,” @GrayscaleInvest Managing Director @Sonnenshein says. “In fact, 43% of those interested investors are female…" pic.twitter.com/1S0SwcI4IN

Money for telescopes and vaccines is great, but the budget’s lack...