Home Blockchain Cryptocurrency BITCOIN ON FIRE: Was this the spark?

The Lightning Torch – a chain tweet between crypto celebrities that demonstrates it can be easy and cheap to pay for stuff with Bitcoin – may have helped light a fire under Bitcoin, with the crypto touching US$4000 this week and the highest daily volume since May last year.

When historians (hopefully) look back on the Great Bitcoin Bull Run of 2019, will the Lightning Torch be the spark?

OK, some other stuff happened too …

Of course, there are plenty of other bullish signs around Bitcoin lately – with Samsung adding a crypto wallet to its new Galaxy phone, Bakkt and Fidelity about to launch, JP Morgan announcing their own digital coin and other signs the institutions have arrived.

But The Lightning Network is the most promising sign that Bitcoin will finally be adopted by mainstream consumers as a currency. Bitcoin already has the name recognition and now it looks like it has a system in place that makes it actually useful

The Lightning Torch AKA #LNTrustChain may not seem like much – a chain tweet amassing 10,000 satoshis (35c) at a time – but the stunt has garnered acres of coverage and proves the Lightning Network enables fast, tiny transactions at a tiny cost.

The main argument from Bitcoin bears has been that it can’t scale, that the network is slow, expensive and horribly inefficient (read: Is Bitcoin Totally Useless?). During last year’s ATH, transactions cost a fortune and took half a day, with the network gobbling up a country’s worth electricity as miners competed for block rewards.

The Lightning Network attempts to fix (some of) those problems, with an off chain solution. If it can scale, then the low transaction costs will make it a very competitive payment system for merchants, who currently shell out around 2.5% to accept credit card payments. 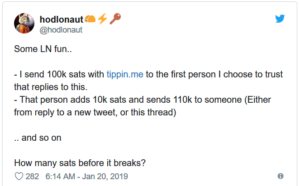 Since Twitter crypto enthusiast ‘hodlonaut’ sent what is now know as the ‘genesis tweet’ on January 20, usage of the Lightning Network has grown almost 40 percent, as the torch passed between crypto celebs including Boxmining, Binance’s Changpeng Zhao, Tron’s Justin Sun and Twitter’s Jack Dorsey.

If Elon Musk finally gives in to numerous exhortations to pick up the torch, the mainstream press coverage could see that number grow further.

As it is, usage of the network has surged by 830% over the past six months. While transaction volume is still small beer – just under $3 million – it does appear to work.

At the time of writing Bitcoin was up almost 9 percent across the week, and just over 5 percent for the month.

While plenty of folk have been taking advantage of a new service in the US that allows you to buy Domino’s pizza (bleurgh) over the Lightning Network, the most promising sign for mainstream adoption has been on Twitter. 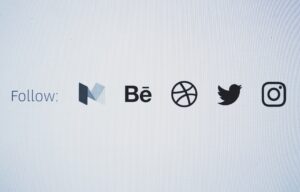 Twitter CEO Jack Dorsey not only took up the torch, but actually increased the word count limit for tweets to support the Lightning Network invoice.

Dorsey has also endorsed a new browser Tweet tipping extension built using LN. “This is excellent” he told his more than 4 million followers about Tippin.me.

Download a Lightning Wallet, transfer a few dollars worth of BTC, open a direct channel with tippin.me and you’re good to go. The extension adds a lightning bolt to each tweet (helping spread awareness) and allows users to tip small amounts for tweets they like.
Dorsey demonstrated the system on his own account this week.

“I hooked this up and already got tipped some satoshis,” Dorsey tweeted on Feb 21.
Leaving aside the complicated morality of ordinary people giving tips to billionaires – even though he only made 49 cents – it was still a beautiful demonstration of the system’s potential.

It’s also widely believed that Dorsey’s other company Square will add LN to its Cash App.

Twitter’s enthusiastic embrace of LN is good news for adoption, but potentially bad news for blockchain based social platforms and tokens like Steemit and Basic Attention Token, which operate in a similar fashion but don’t have the social media giant’s reach.

(If this all sounds familiar, there used to be a Bitcoin App called ChangeTip, but it died in 2016.)

The Lightning Torch and Tipping.me are ideal ways to grow the network, which doesn’t have a lot of liquidity at present. Due to some complicated mechanics, LN requires all the various intermediaries in the network to all have enough ‘staked’ to process your transaction. This means you probably won’t be sending large amounts of money anytime soon. It hasn’t been designed for this, to be fair.

Trustnodes received the Torch this week and reported that when the system works, it’s great. But it doesn’t always work. “When it worked, it does have a bit of a wow factor. The payment went out straight on and the fee was unfairly cheap … It only worked smoothly once in the three times that were tried, however.” 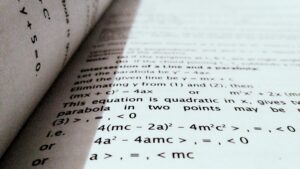 And it may never work say critics …

There are also plenty of naysayers with complicated mathematical models who believe The Lightning Network is fundamentally flawed and won’t be able to scale up.

Invest in Blockchain’s analysis suggests that if the network grows to 25 million active users it would require 57.08 on chain transactions a second and an estimated block size of 8.56MB. If it ever gets to a billion users, it would require a 342.47MB Bitcoin block size.

But then again, back in the 1990s no one really knew how to ensure the internet could cope with HD streaming video, and they managed to solve that. As Invest In Blockchain points out, there are theoretical solutions already being worked on.

Despite plenty of critical and cautionary tweets that this week’s percentage rise won’t herald a new bull run, sentiment does appear to be turning.

As Binance’s CZ tweeted: “Is it just me? Or are we getting more excited at 4k than 20k?”