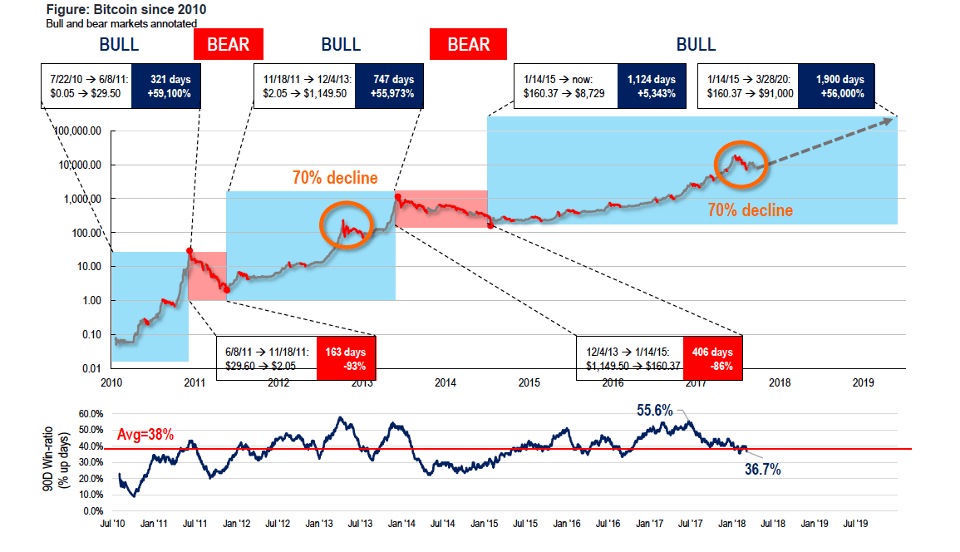 If Australian cryptocurrency investors were hoping for a weekend resurgence, they’re out of luck.

The major sell-off began on March 6, when reports emerged, claiming a trustee of the now-defunct Mt. Got exchange was offloading $400 million in Bitcoin and Bitcoin Cash.  Over the next few days, the plunge continued as investors were again spooked by Google’s ICO ban, further cryptocurrency regulatory moves, and bearish technical signals.

But amid the fear, uncertainty, and doubt, renowned global financial experts are still predicting a positive future for Bitcoin.

Former J.P. Morgan’s Chief Equity Strategist and current Head of Research at Fundstrat Global Advisors, Tom Lee, is one of them.

Commenting on Saturday about the horror week for cryptocurrencies, the respected Wall Street analyst said:

“Bitcoin was up in March only 1 of past 7 years… our data scientist, Sam Doctor, thinks it is because bitmain ASICS are shipped in March.”

(Bitmain is a Chinese company that designs and manufactures ASIC chips – a key piece of hardware for the mining of Bitcoin).

Lee and his team at Fundstrat have released a new graph (below) which explains his prediction.

It displays the BTC/USD price on a logarithmic scale, opposed to linear (the base of nearly every Bitcoin chart). The logarithmic graph helps put Bitcoin’s price movements into a longer-term perspective.

Each of Bitcoin’s 4 value declines of 70% or more are highlighted. After each of the previous three drops, there have been significant gains – that’s the basis of Lee’s $25,000 prediction.

Fundstrat also released a full report about the cryptocurrency market on Thursday.

In it, Lee, and colleague Robert Sluymer stated investor over-reaction to negative news could see Bitcoin’s price falling to as low as $5,873 before rebounding to their target of $25,000 by the end of the year.