Home Blockchain Cryptocurrency Bitcoin realized cap hits all time high: What it means for the...

Bitcoin’s realized cap has hit a new all time high – but it’s the ratio to the actual market cap that could make a difference to BTC price.

Bitcoin’s realized market cap hit a new all time high of $103.4 billion this week according to Glassnodes.

Coinmetrics, which invented the metric, puts the figure slightly higher at $103.5 billion.

Bitcoin’s actually been printing fresh all time highs for much of its short life, but hit the skids after the all time high crash falling from $91 billion in March 2018 to $76.6 billion a year later over the course of crypto winter. 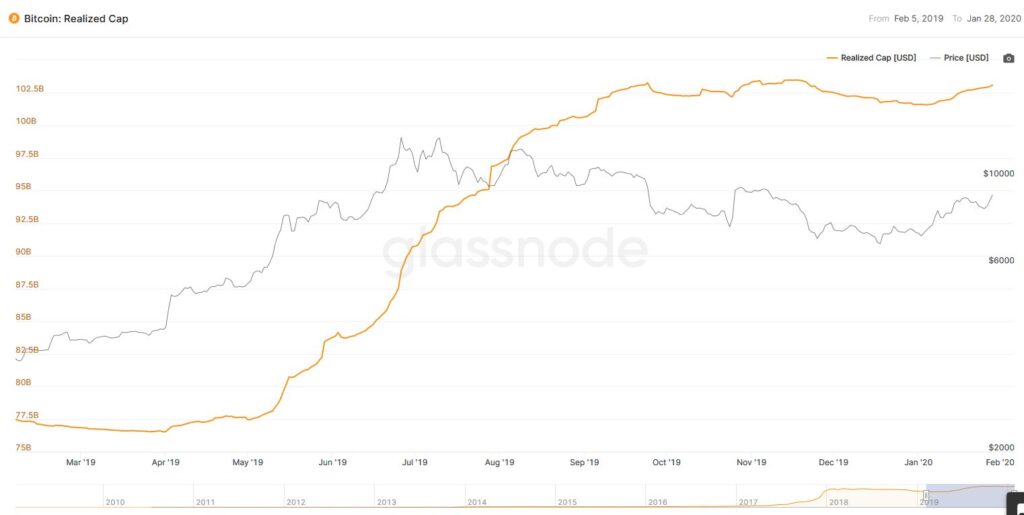 What is realized cap?

To explain the metric: Bitcoin’s market cap is the last price traded, multiplied by the total supply.

The realized cap, is instead calculated by taking the value of all coins at the price they last transacted on chain.

So basically, it’s what people actually paid for their Bitcoin added up.

So as Rythmtrader points out the new ATH means: “The amount paid for all bitcoin has never been higher than it is today.”

Instead of marketcap, realized cap is calculated by taking the value of all coins at the price they last transacted on chain.

The amount paid for all bitcoin has never been higher than it is today. ???? pic.twitter.com/v9vGYCMY7x

As the metric reflects what people paid for their Bitcoin, the implications of it increasing is that more and more real money has been flowing into Bitcoin for most of the past year.

Marty Bent wrote in today’s newsletter: “It means that, despite all of the FUD and vitriol thrown at Bitcoin by the mainstream, despite the massive price correction we’ve experienced since the all time highs reached in December 2017, people out there still think Bitcoin is an asset worth owning.”

Realized cap can show when Bitcoin is overvalued

Realized cap is one way people can use to gauge whether Bitcoin is overvalued.

If there’s a large divergence between realized and standard marketcap that means a lot of people have unrealized gains so there’s the possibility they will cash out and tank the price.

At present the realized cap is a lot lower than the standard marketcap of $168 billion.

There’s an easy way to visualise this with the Bitcoin MVRV Ratio which compares the two.

Juan Villaverde and Dr Bruce Ng from Weiss Rating looked into this recently and said the data suggests most people paid around US$5600 for their BTC, which means they’re sitting on open gains.

“But those open gains are still small,” they wrote. “And if history is any guide, you won’t see another major decline until the Market Cap is about four times higher than the Realized Market Cap.”

“We can’t predict what the Realized Market Cap will be at that time. But even it stays the same as it is today, we’d be looking at about USD 21,000 BTC at that time.

“And if Realized Market Cap itself rises, as it invariably does in a major bull market, the price of BTC would have to be far higher.”

Feel free to get in touch with feedback, errors or omissions, at [email protected]