Recently, advertisements for a ponzi scam utilizing Winslet’s image alongside fabricated quotes has circulated around Facebook.

The advertisement links to a site called Bitcoin Code, which disguises the scam as an automated trading algorithm for Bitcoin markets.

“Right now my No1 money-maker is a new cryptocurrency auto-trading program called Bitcoin Code,” and “It will NOT be around forever, so do not miss out,” are among the false quotes attributed to Winslet.

Once aware of the advertisements, a spokeswoman for Winslet responded, “This misleading promotion is completely disingenuous and categorically false.”

“We are dealing with this through appropriate channels,” she added.

Winslet, known for lead roles in Titanic and Eternal Sunshine of the Spotless Mind, is the latest instance of scam advertisements that are growing increasingly frequent.

The ad claimed that Jackman was making so much money from his Bitcoin investment that he was going to quit acting.

While it’s unclear as to what actions Winslet – or Jackman, for that matter – will take, a potential lawsuit would not be the first of its kind.

Unfortunately, the increasing regularity of these ads suggests that they continue to rake in money and that Facebook is failing to protect its users against these scams.

One negative consequence of the popularization of cryptocurrency is an outlet for scammers to create new and more effective methods of scamming.

And as these scams continue to generate massive capital, the perpetrators are constructing increasingly sophisticated methods for further attacks.

In 2018, the “Crypto Giveaway” scam infected the cryptocurrency Twitter community. In this scam, bad actors tweet fake testimonials linking to scam sites that claim to be giving away free Bitcoin or Ethereum.

The way these scams work is that they promise that if you send some amount of coin to the listed addresses, they will send back five or ten times the initial amount. 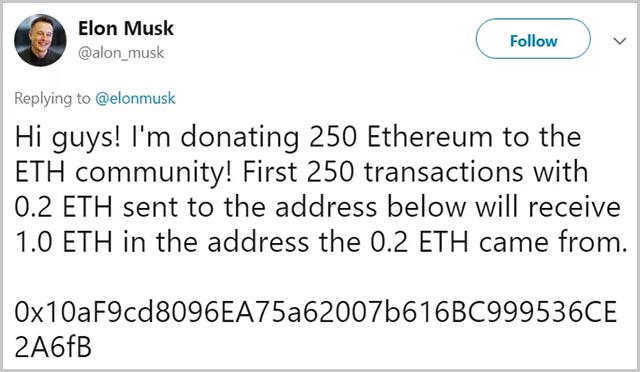 The sites are complete with a fake block explorer that suggests that many people are sending in crypto and multiplying their balances.

Fake Twitter accounts pretending to be Elon Musk, John McAfee, Vitalik Buterin, and even Donald Trump have cropped up to help convince users that the offer is legitimate.

Networks of bot accounts like and retweet the reply, pushing it to the top for everyone to see.

Often times, the scammers will hack into a verified account and change the information to reflect other popular accounts.

With identical appearances and the “blue check” of authenticity, the only noticeable difference is the handles of the accounts.

Many users have suggested Twitter should implement some check against verified accounts making changes to their profiles, but over a year later, no meaningful attempt has been made on the part of Twitter in defending against these scammers.