Bitcoin SV devotees were celebrating today after the much maligned fork appeared to overtake Bitcoin Core in transaction volume over the past 24 hours.

According to BitInfoCharts (but not corroborated by other data sites), the Bitcoin SV network processed a total of 291,650 transactions, compared with Bitcoin’s 280,756 across the same period.

It’s official. BSV surpassed BTC in transactions/day from our use/apps!!! We passed BCH and never looked back. Now we passed BTC!!!https://t.co/yfWA7F0KVt pic.twitter.com/tap695rzta

Critics point out that even if you take the 24hr transaction volume figures as gospel, the vast majority of activity on the Bitcoin SV network is arguably nothing but spam designed to fill up blocks with the busy work of recording the weather and the price of various cryptocurrencies on a minute by minute basis.

Still, Bitcoin SV’s block sizes are now so large, they’re actually difficult to fill up even with spam transactions.

In August, Bitcoin SV’s maximum block size was increased from 128MB to a theoretical 2GB and earlier this morning it tested out a monster block containing 1.5 million transactions. 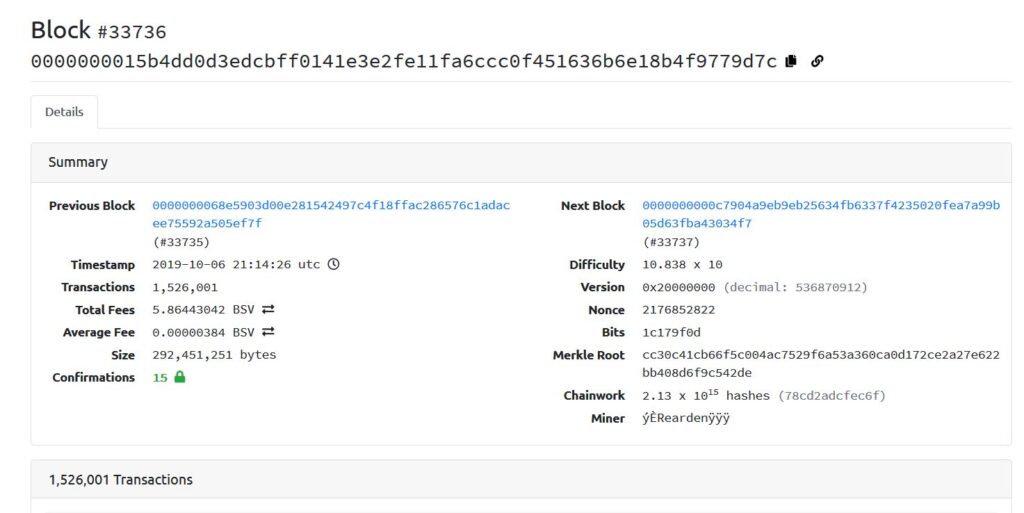 So Bitcoin SV seems to have demonstrated the technical capacity to scale – the question is, can it overcome the haters and does anybody in the real world want to actually use it?

Two apps on Bitcoin SV account for most transactions

In the middle of the year, it emerged that around 96% of Bitcoin SV’s transactions were created by a single weather app – which, in 100 years time, may finally convince climate skeptics the blockchain recorded temperature record is correct.

In the past week or so WeatherSV has been joined by Preev, an app that does pretty much the same thing by recording the prices of 15 crypto pairs on a minute by minute basis.

At current fee prices, you can record a week’s worth of BSV-USD prices, updated once a minute for $3.66.

Was great to meet the @preev_ team at #CGSeoul. It looks like they are about to give us some serious competition for daily TX volume. Our two apps combined may soon challenge BTC daily volume. 📈🍻 pic.twitter.com/6kfFv6jtia

I thought the blockchain was transparent?

A quick glance at some of the main blockchain data sites shows that none of them agree on any of the figures – which is a concern given how transparent the blockchain is supposed to be.

Other sites such as CoinMetrics, Coindance and Messari do not show Bitcoin SV overtaking Bitcoin just yet – though it’s close enough that it no doubt will surpass Core’s transactions when Preev starts recording more pairs or more apps come online.

Looking at the data from Messari’s screener (play around with ‘columns and filters’ to see transactions and fees), none of the Bitcoin brands are near the top according to transaction volume.

So in terms of blockchain fee revenue, it remains a two horse races between Ethereum and Bitcoin.

EU reveals plan to borrow 750 billion euros for its recovery...