Bitcoin trading volumes have again risen to record levels – three times higher than the 2017 peak – as BTC targets the $9000 barrier.

With Bitcoin up 20% so far this year, volumes have also spiked, topping $46 billion in a day according to CoinMarketCap. That equals the highest trading volumes we’ve ever seen.

That’s a sharp increase on the $20 billion volumes we have been seeing, and three times greater than the $15 billion daily turnover back in December 2017.

It’s a big turnaround from a fortnight ago, when all the talk was about BTC volume plummeting to 90% below the 2019 high.

Of course, the majority of that volume is just fake wash trading – but it’s not like wash trading didn’t dominate back then too, so in relative terms it’s still big news.

The combined trading volume of all cryptocurrencies reached $170 billion in a day (just $70 billion shy of the total market cap) with the pump in the prices of altcoins, including Ethereum up 15.3% this week, Bitcoin Cash 34%, Litecoin 24%, EOS 30% and Dash 131%. Bitcoin SV has pulled back to being *just 155%* up this week.

CMC’s figures should be taken with high blood pressure inducing amounts of salt, however.

To take but one alternative source, Blockchain.com reports the USD value ‘on major exchanges’ that it counts was around $43 million.

That figure is obviously far from the whole story, but it’s considerably less in relative terms than Blockchain.com’s $3.8 billion figure for the all-time high. 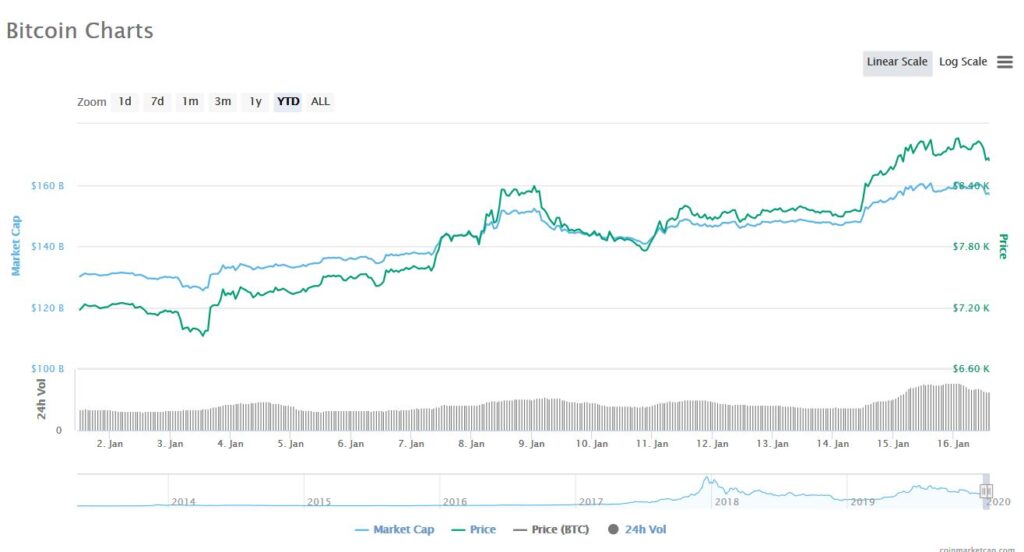 Bitcoin is currently trading at levels last seen in early November and is threatening to break through the $9000 mark.

That’s on top of an 8.7% spike yesterday (which since pulled back) which was the biggest one day jump since mid-December.

On CNBC, Jehan Chu attributed the price spike to the US/Iran conflict, the impending block reward halving and the launch of CME Bitcoin options.

Future is brightest since October

In other positive news, cryptocurrency market analysis firm Skew reported that yesterday saw more interest in Bitcoin futures contract than any other day since October 26.

That was the day after Chinese president Xi Jinping announced the country was going all-in on blockchain technology, leading to a massive pump in the BTC price.

More than $25 billion worth of contracts changed hands on the major platforms including OKex, Kraken, Binance, CME, BitMEX, and others.