The godfather of modern-day action-RPGs Diablo 2 just turned 20 and Blizzard Entertainment has something special in store just for the occasion.

As of June 29, 2020, it has officially been 20 years since Diablo 2 made its devilish debut, forever changing the direction of hack and slash RPGs as we know it.

Developer and Publisher Blizzard Entertainment isn’t about to let the special day go by unnoticed, as they’ve put up limited edition merch for sale, as well as a free goodie for owners of the game’s sequel Diablo 3. And that’s only the half of it.

The California-based video game developer set up a day-long speedrun livestream with record holder MrLlamaSC, featured a parody video developed by animator Carbot Studios, and even published a lengthy blog post looking back at the legacy of Diablo 2. 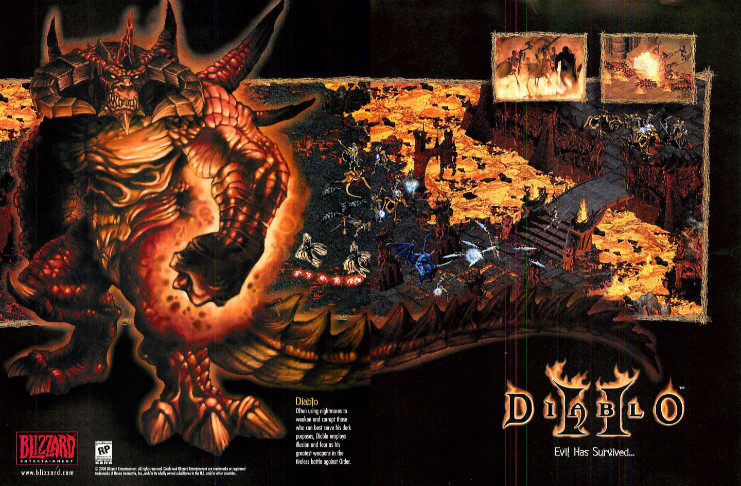 Blizzard has a treat for owners of their most recent Diablo installment, as players can log in any time after June 29 to receive their very own Prime Evil Wings.

The menacing-looking wing cosmetic shows off a row of tendrils patterned after the character design of Baal—the final boss in Diablo 2’s fantastic Lord of Destruction downloadable content.

Baal himself may not have had wings, but if he did, they would’ve probably looked a lot like the Prime Evil ones.

Make some space for the towering Diablo bust

Diablo fanatics are going to want to clear some space on their shelves and prepare their wallets for Blizzard’s remarkably detailed Lord of Terror limited edition bust.

The towering Diablo effigy stands 10.5 inches tall and 9 inches wide, making it a must-have for any enthusiast of the franchise. It doesn’t come cheap, however, as fans would have to shell out a whopping US$140 [AU$204] to secure themselves the item.

Blizzard employees look back on Diablo 2

Diablo 2’s retrospective blog post shares heartwarming stories from Blizzard team members as they reminisce about the unforgettable personal stories that made the hack and slash classic so special.

Head of the Diablo franchise, Rod Fergusson wrote about the times the RPG kept him and his brother connected, even after his sibling left for university.

Upcoming Diablo 4 Lead Game Designer Jesse McCree explained how the second game in the series helped her grow as a professional, and still inspires her work today.

Diablo 4 Associate Game Producer Lily Gardner had a lot to say about the classic but settled for a brief run-through of her playing the game during her childhood, and how it shaped the person she is today.

On June 29th, 2000 we released Diablo II. What an honor it is to be a part of that incredibly talented team. Never did I imagine the game would be so beloved and frequently played 20 years later. It’s truely something special. Happy 20th Anniversary Diablo II!! 🎉🎈🎂 pic.twitter.com/5yYUbEOlky

Whether as a video game genre or as a personal experience, Diablo 2 will forever go down in history as a cornerstone of modern-day gaming.