Bloodstained: Ritual of the Night is now a critical success, hitting the 1 million copies sold milestone. To celebrate, dev team Artplay is showing off its roadmap for the next year.

A ton of the upcoming content for Bloodstained: Ritual of the Night are coming over the next few weeks. More will come out in the third and fourth quarters of the year, including more playable characters and more game modes.

At the moment, Artplay is testing a new mode. They plan on adding this feature this month. According to their dev blog, the first update will come on June 23. Also, two new updates include a Boss Revenge Mode and Chroma Wheel add-on.

For Boss Revenge, the game will reverse the roles this time, making bosses playable against the main characters. Four bosses are up available for this update. It even adds a ton of new toys to play with. 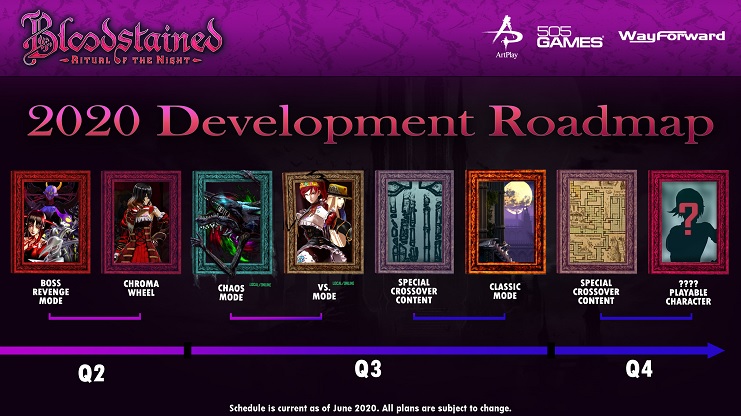 While the boss names are unannounced, the official roadmap has a photo of the potential characters they will use. These include Bloodless, Bathin, Gremory, and Andrealphus.

The June 23 update will also add the Chroma Wheel update. Chroma Wheel is an in-game salon that lets players customize the looks of their characters. These aesthetic changes will include hair, clothing, and even skin color.

Both Boss Revenge and Chroma Wheel will come to all platforms on June 23 except the Switch. The Nintendo Switch will receive the same update by July. Meanwhile, The next updates will come in the third quarter of 2020 and the fourth quarter of this year. These upcoming updates will add substantial content to the game.

Three new modes plus one playable character coming this year

For the third quarter update, Bloodstained: Ritual of the Night will be adding three new game modes. These will include VS Mode, Chaos Mode, and Classic Mode. The first two modes will be available both for local play and also online.

The first VS Mode will be a PVP battle wherein players will “compete by indirectly attacking each other.” This detail revealed a non-traditional VS mode, which could be interesting for the players.

Chaos Mode, on the other hand, is a specialized Boss Rush mode with a single-player or two-player gameplay. The mode adds a randomized item drop and specific goals that give more equipment once players complete them.

Classic Mode is compared to the original Castlevania style of gameplay in the 80s. The mode has five stages, allowing the player to fight sub-bosses with three-difficulty levels.

The last update for the 4th quarter of this year is a mystery playable character. The devs did not list who it is, but they specifically assured it’s not Dominique. Bloodstained: Ritual of the Night is available on all platforms, including PC and all consoles.