UPDATE 18/1: Craig Wright’s lawyers have reportedly said he only has access to the addresses and does not have the keys to unlock Satoshi’s BTC billions.

Wright’s lawyer Andres Rivero told Decrypt this morning: “The file that he’s received did not include private keys.”

However, Wright “expects” that he will receive the keys at a later date, which may either come whole or split into parts. Needless to say, this development appears to contradict Wright’s earlier testimony.

The much maligned Bitcoin SV has been on an astonishing 270% spike in the past week and 130% in a day.

It’s now the No.4 cryptocurrency by market cap and has, temporarily at least, overtaken Bitcoin Cash.

It’s all based on speculation that Wright is set to prove he really is Satoshi Nakamoto the inventor of Bitcoin.

This morning Wright notified a Florida court the key slice has arrived that will enable him unlock the Satoshi wallets (with around $10 billion worth of Bitcoin) at the heart of legal action being taken against him by former BTC mining partners Dave Kleiman.

Biggest Bitcoin news ever … if true

If true, this is earth shattering news (though we take everything in this case with a grain of salt).

Specifically, Dr. Wright notifies the Court that a third party has provided the necessary information and key slice to unlock the encrypted file, and Dr. Wright has produced a list of his bitcoin holdings, as ordered by the Magistrate Judge, to plaintiffs today”

Ira Kleiman’s lawyers are unimpressed with the filing.

They pointed out that “the document produced is simply a list of 16,404 addresses” and does “not provide any information on the bonded courier, the company he/she worked for, when he/she came, or the message delivered”.

Attorneys Velvel Freedman and Kyle Roche asked the court for a 90 day extension in order to depose Wright, among others.

They think Wright is playing around.

“He has engaged (and appears to be continuing to engage) in conduct that has made it difficult to obtain discovery related to these core claims.

To be more direct, Craig has forged documents, submitted false Declarations and perjured himself in open court—all in an effort to prevent the truth from being revealed.

The pump took off in the past 24 hours after screenshots circulating on the web (we also cannot confirm they are real, just that they are circulating), in which Wright himself has apparently said:

“Funny … but next week submission. I will start teaching how next few weeks. And bonded couriers are not shadowy.

“Next week we file. Already arrived” 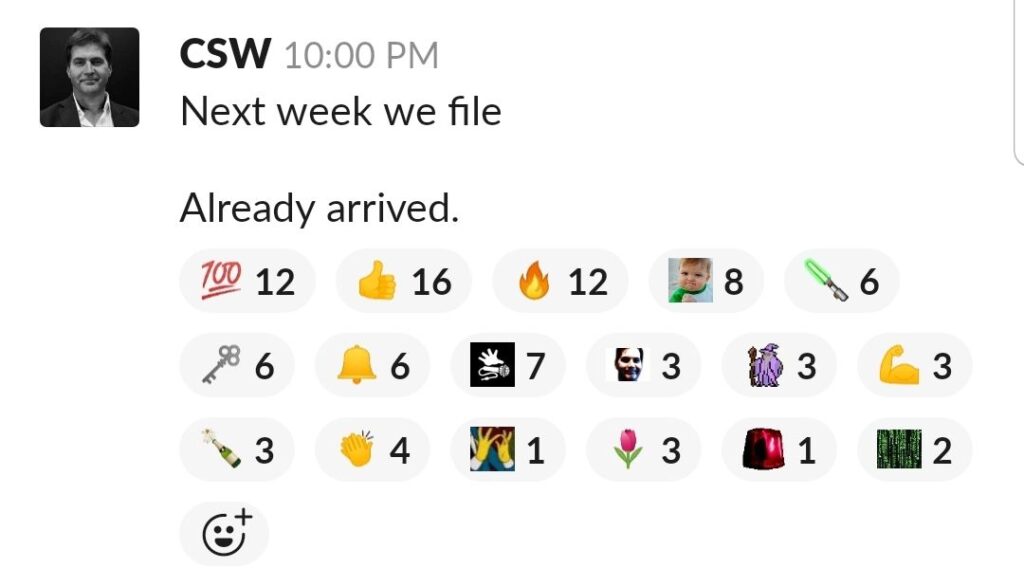 What is the Tulip Trust?

The ‘Tulip Trust’ is Wright’s explanation for why he was unable to provide the court with a list of his Bitcoin holdings – or indeed to prove to the court there was any mined Bitcoin at all.

Wright said the million or so Bitcoin was deposited into the ‘Tulip Trust’ a decade ago which was encrypted with ‘Shamir’s Secret Sharing Algorithm’ with the passkey divided into a bunch of different slices.

The ‘slice’ enabling Wright to unlock the Tulip Trust, recover the Bitcoin (then possibly destroy BTC in favour of BSV) was given to a ‘bonded courier’ who was due to turn up a decade later on January 1 this year.

According to the court filing, the bonded courier has now arrived and Wright has given the court a list of his Bitcoin holdings.

Very few people believed this story including the original Judge, and the current Judge Bloom who said: “Given the Defendant’s many inconsistencies and misstatements, the Court questions whether it is remotely plausible that the mysterious ‘bonded courier’ is going to arrive.

Wright produced 482 sealed documents in early January fueling the rumours, but these didn’t contain information on the key.

The new judge on January 10 gave him until February 3 to produce information about the key.

LISTEN: Micky interviewed Wright for 30 minutes on our Blockchain Journeys podcast to find out what the real man behind the controversy was like. He talked about his autism and how he’s dealt with the constant negativity that surrounds him.

Is this a Pump N Dump or Exit Scam?

Anti Wright blogger Arthur van Pelt who reposted the screenshots sees this as nothing more than a ‘pump ‘n’ dump scam.

“Craig and I and others are meeting next week to come up with a plan for helping the BSV ecosystem really explode in 2020. It will do this anyway, we just want to pour some more fuel on.” 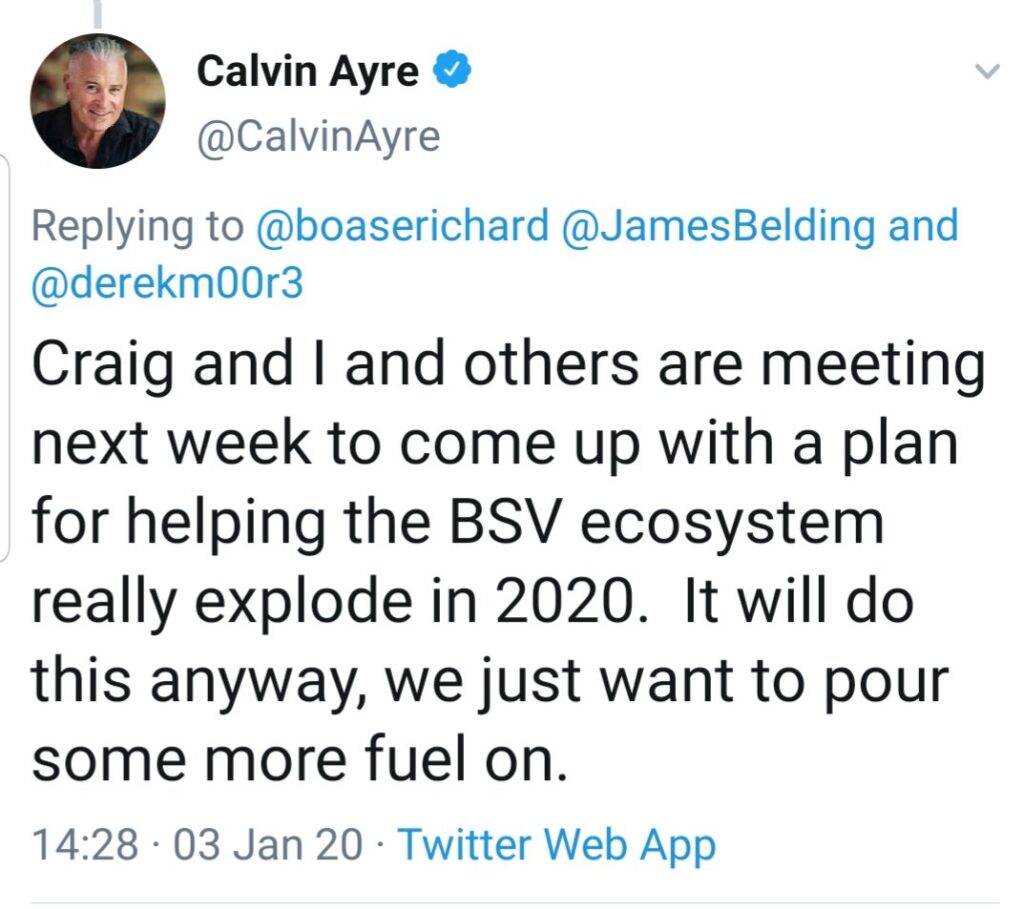 On January 11 Ayre tweeted a promise of “Big BSV news”

Bitcoin SV is the #3 crypto asset, which is great because nothing is real anymore.