Bitcoin has plunged by more than 10% with pundits – and Friday’s expiry of CME futures – suggesting a further ‘rapid descent’ is possible.

The number one cryptocurrency lost $1000 in the space of 30 minutes overnight, sending prices to a three month low.

An underwhelming first day for Bakkt, which traded 71 BTC monthly futures contracts, is the likely catalyst.

Its performance pales in comparison to CME futures’ first-day volume of 5298 BTC in December 2017. That’s a 75x difference.

Price discovery unfolding before our eyes

The price looked like it was headed below $8000 at one point, but Bitcoin has since recovered slightly to around $8600.

The plunge was exacerbated by margin calls at BitMEX which saw $500 million Longs liquidated.

The plunge also caused a flash crash on Binance, with the low liquidity BTC/BUSD pair briefly trading Bitcoin for $1800. 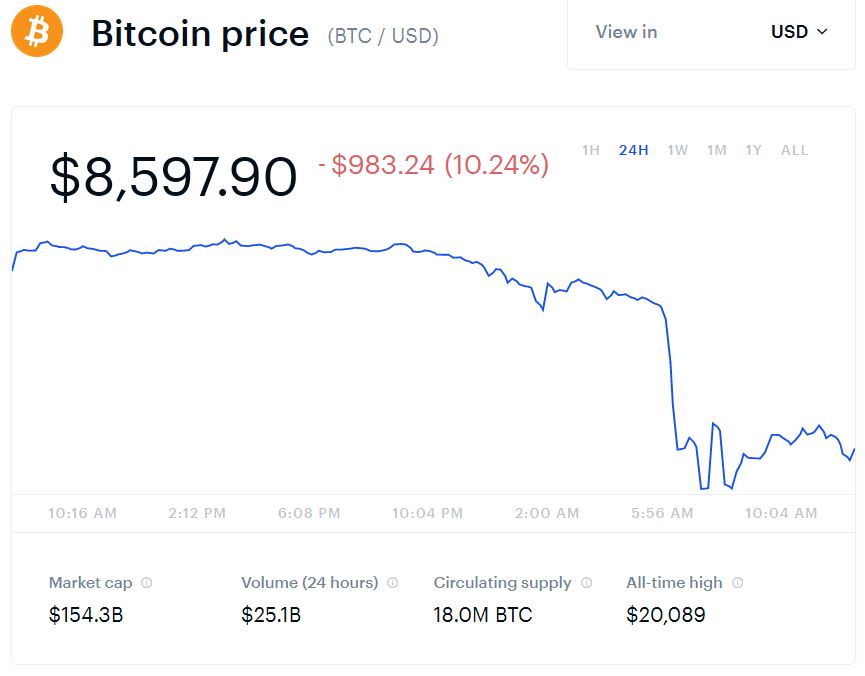 A ‘rare event’ even for Bitcoin

“Even for Bitcoin, this is a pretty rare event,” said Messari director of product Qiao Wang.

Senior market analyst at eToro, Mati Greenspan said prices had been on the tear this year on expectations of institutional interest – so Bakkt’s launch was seen as “an important milestone”.

“A large part of the narrative driving the massive bull run this year was surrounding wider institutional adoption… volumes so far have been underwhelming.

“The entire episode seems like a giant case of ‘buy the rumour, sell the news.'” 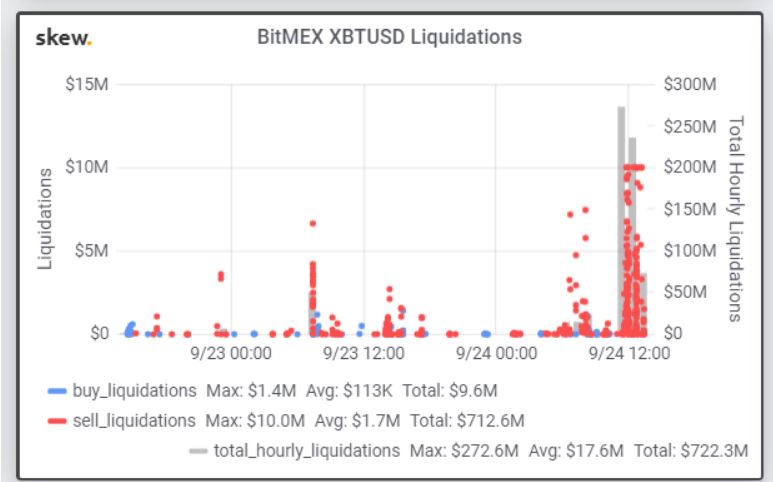 Investors are braced for further losses, with around half of CME futures open interest set to expire on Friday.

Many believe the expiration of futures creates volatility and puts downward pressure on prices.

In another bearish sign, volumes on CME BTC futures have dropped significantly from late June highs around $1.8 billion to around $300 million today.

Institutions' interest peaked at the June expiry when Libra was making the headlines pic.twitter.com/u5zZ7XJsWg

Gold bug Peter Schiff could barely contain his glee at the market meltdown, tweeting that Bitcoin had “finally broken below the support line of the large descending triangle it has been carving out for months.

“This is a very a bearish technical pattern, and it confirms that a major top has been established. The risk is high for a rapid descent down to $4,000 or lower!”

#Bitcoin has finally broken below the support line of the large descending triangle it has been carving out for months. This is a very a bearish technical pattern, and it confirms that a major top has been established. The risk is high for a rapid decent down to $4,000 or lower!

“Price action is being driven by short-term technical analysis right now, as every low price that Bitcoin has bounced off of, and every high price that has been reached has proven to be resistance.

“A range of 100 days just broke to the downside. If this is a bullish shakeout it’ll be obvious once BTC reclaims $10k. If this is bearish I don’t want to be long.

A range of 100 days just broke to the downside.
If this is a bullish shakeout it'll be obvious once BTC reclaims $10k.
If this is bearish I don't want to be long.

Keep calm and carry on

Bakkt has only just launched, however, and ICE founder Jeff Sprecher told Fortune recently that it could be weeks or months before Wall Street considers Bakkt a success or a failure.

Some of Bakkt’s largest prospective clients are yet to get permission to trade physically settled futures.

And on Monday, Three Arrows Capital CEO Su Zhu tweeted that he believed volumes would build.

“Bakkt will be likely first a trickle and then a flood,” he said

“The reality is that most regulated futures contracts get low adoption on (day one) simply (because) not all futures brokers are ready to clear it, many (people) want to wait and see, the tickers are not even populated on risk systems, etc.”