A new study shows that global carbon dioxide emissions are sharply accelerating and may surpass pre-pandemic levels as countries worldwide begin to navigate the new normal.

A few months ago, carbon emissions rapidly decreased along with the global economy’s productivity as people all around the world were forced to stay at home—an initiative to curb the spread of coronavirus.

However, as governments face economic recession and left with the crucial option to reopen economies, a new study shows that carbon footprints jump back nearly to its pre-pandemic levels again. Which may surge to higher-than-before levels, climate scientists warned.

In a recent article published by the Nature Climate Change, carbon emissions May study revealed that greenhouse gases had bounced back to about five percent below the recorded levels last year. Scientists described the rebound as quite “rapid,” and warned that climate change still exists and continues to accelerate. Worst, the study suggests that it may surpass pre-pandemic levels.

Carbon dioxide emissions fell by a quarter during the peak of coronavirus lockdowns. In April, the numbers were still down by about 17% compared to the average rate recorded a year ago in the same period.

But when restrictions around the world were lifted by mid-June, researchers noticed a significant increase in greenhouse gases. 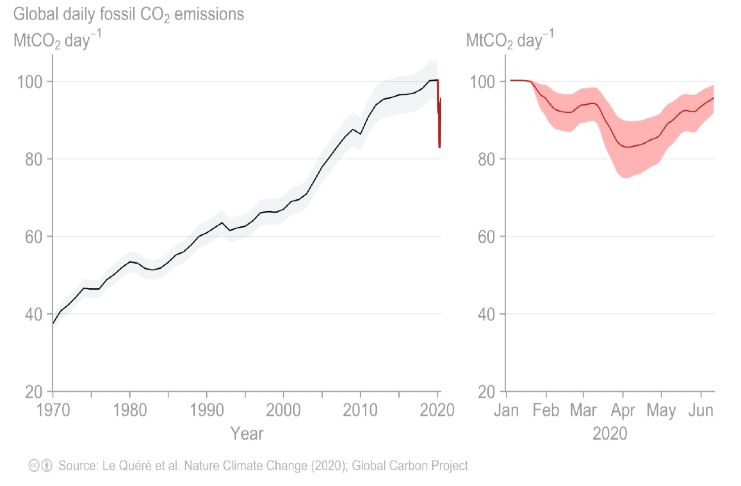 On a lighter note, scientists noted that it might reduce to an estimated high of seven percent if governments continue to impose coronavirus restrictions until the end of 2020. If not, it may potentially drop to four.

Still, according to them, an estimated reduction of four to seven percent is not enough to fight global warming.

“Things have happened very fast. Very few countries still have stringent confinement. We expected emissions to come back, but that they have done so rapidly is the biggest surprise,” told Corinne Le Quere, a professor at the University of East Anglia, to The Guardian.

In the U.K., carbon emissions were down by 31% in early April but are now 23% lower than 2019’s levels. In the U.S., the Trump administration had also stopped following more than 100 environmental rules, while China is still working to build more coal plants.

The study appears very alarming for many scientists. According to them, the drop in greenhouse gases during lockdowns is only temporary.

But what truly worries scientists is that people’s fear of coronavirus may prompt higher-than-before carbon dioxide emissions—particularly now that some governments urged people to avoid public transport and use private vehicles instead.

In a statement quoted by The Guardian, he said:

“What we may see now are emissions that exceed pre-pandemic levels, if, for instance, more people start using private instead of public transport because of health concerns.”

Professor Le Quere also emphasized road transport as the most significant contributor, citing that the sector will always surge back if governments do not act. The head of science of Friends and Earth Mike Childs also argued the same sentiment.

“By saying that people should jump back into cars, the government is contributing to increased pollution […] Road use was the big problem,” Childs told the Guardian.

On a good note, some cities such as Paris, Colombia, and New York are planning to solve the problem by adding more spaces for cyclists and walkers.