Civilization 6 is about to release new content that will bring fresh gameplay to the title. 2K

The updates will start on May 21, opening with the Mayans and Gran Colombian pack. The extra content will have new leaders, City-States, and much more. The game released in 2016 and is almost four years old, with already a ton of content ready as it is.

The Maya and Gran Colombia pack will add a ton of extras to the game. Additional leaders always come with their civilizations, potentially Simón Bolivar for the Colombians. There will also be new special buildings and units, together with Natural Wonders.

Players should also expect new resources to use, together with extra City-States in the fray. 4X RTS game fans will also enjoy the new mode called Apocalypse Mode. In this new add-on, the players will experience new environmental gameplay changes.

These environmental changes will include forest fires, solar flares, and even meteor showers. Players can imagine the difference a random asteroid strike can make in a game. This mode encourages players to work harder and faster and prevent extreme turtling.

“We’re very excited to be adding even more content to Civilization 6, ensuring longtime players and franchise newcomers have something fresh to look forward to in the months to come,” said Anton Strenger, Firaxis’ lead game designer.

The next pack will then come in July, which will have Ethiopia and its leader. The pack will also have new districts and structures, together with another mode called Secret Societies.

Every other month, dev team Firaxis will publish two civs and a game mode, then a civ and a game mode. This will continue until March 2021. Series creator Sid Meier is also looking to release his autobiography this year.

The entire New Frontier Pack will cost $40 as a bundle, but players can buy one by one. Every standalone update will cost $9 for two leaders and $5 for one leader, which adds up to tidy $42. 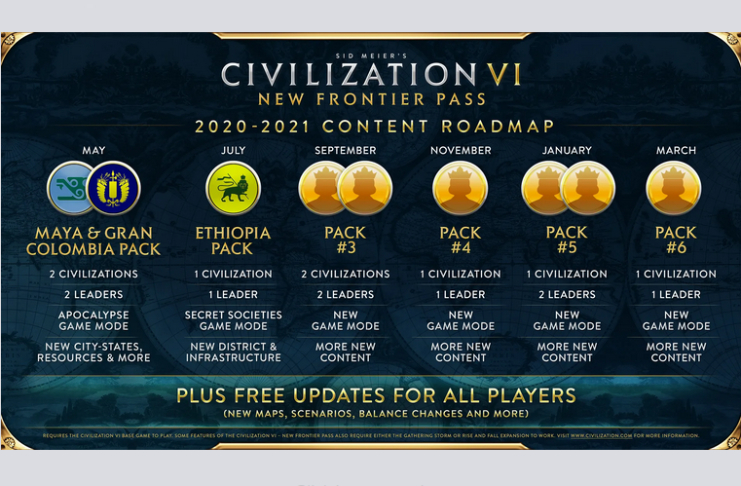 If fans opt for the pass itself, they can get a few more goodies with it. The pass will also net players Teddy Roosevelt and Catherine De Medici Persona Packs. These will give players new leader models, together with more gameplay bonuses.

The persona packs will come with the Ethiopia DLC in July. Like they’ve always done, 2K Games and Firaxis will continue to do free updates for Civilization 6.