Climate change is happening sooner than many climate scientists thought it might. A new report shows that rising heat and humidity levels are happening a century before most predictions.

According to CNN, many climate scientists have predicted the rapid rise of potentially fatal heat and humidity to happen closer to the end of the century.

But this Columbia-led report shows that worldwide, deadly heat and humidity levels are already happening today.

The report — prepared by Colin Raymond, Radley Horton, and Tom Matthews — showed that while climate scientists had previously identified the issue of heat-humidity being too high for survival, they had underestimated the timeframe for its onset.

The map below shows recorded instances of intense heat signified by colors ranging from yellow to red. 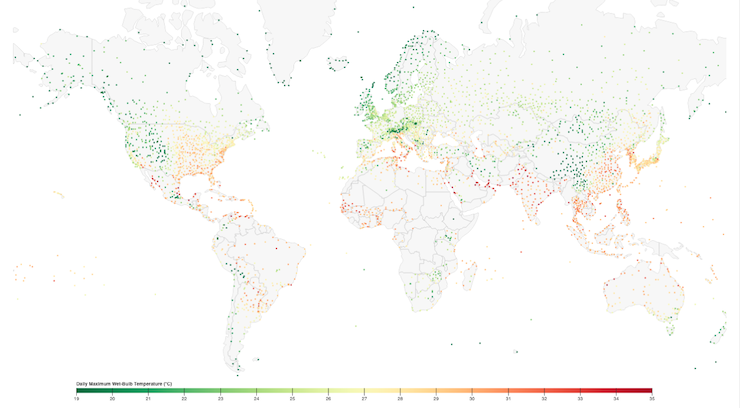 According to The Verge, Raymond et al. used the data from 7,877 weather stations around the world. They then proceeded to study individual daily temperatures and humidity per location, rather than drawing an average number for a span of time.

Where averages showed a gradual increase, daily records showed that deadly heat-humidity readings were already happening in various locations around the world.

One example given by the report is Iran’s Bandar Mahshahr City. It recorded a 35-degree Celsius wet-bulb thermometer reading in 2015.

In Fahrenheit, that would amount to 160 degrees. This number doesn’t even exist in the current National Weather Service’s heat-index meter.

A matter of sweating

The problem when there’s too much moisture in the air is that it’s harder for humans to sweat.

If the body becomes unable to cool down naturally, it will need to rely on external sources to do so, such as air conditioning.

Failure to access any external mode of cooling down will cause the body to overheat. This could lead to heatstroke, organ damage, and eventually death.

“Climate change is increasing both air temperatures and the amount of moisture in the air, making humid heat events more frequent and severe.”

An issue from coast to coast

The regions most at risk of this happening are currently those along the coast. This means any city with a river or a beachfront. Those in the tropics also are at moderate risk.

The takeaway from this study, according to Columbia’s press release, is that climate change is already happening.

“We may be closer to a real tipping point on this than we think,” added Horton.