Coffee futures in New York rose as high as 8.8% in March as the majority are stockpiling over fears of this pandemic.

The International Coffee Organization (ICO) reported that prices have dropped 30% below the average since 2016. Last month, the Arabica coffee prices were above $1.12 per pound, coming from a peak of over $3.00 per pound around 2011.

They also reported that over 25 million farmers worldwide are struggling to cover their operating costs as input prices continue to rise.

Furthermore, the world coffee consumption is estimated at 169.34 million bags, which is 0.7% higher than in 2018-2019 as COVID-19 presents considerable downside risk to global coffee consumption, according to the March 2020 ICO report.

Panic buying may cause future shortages

In recent weeks, food stockpiling has been an ongoing problem. Repercussions on stockpiling coffee are unclear as Assistant Commodities Economist Samuel Burman of Capital Economics says:

“There is some evidence that countries are bringing forward coffee purchases on anticipation about future supply disruption.”

In the ICO report, they also mentioned that disruptions to the supply chain both in shipping and harvesting could eventually lead to temporary supply shortages, putting upward pressure on prices in the short term. 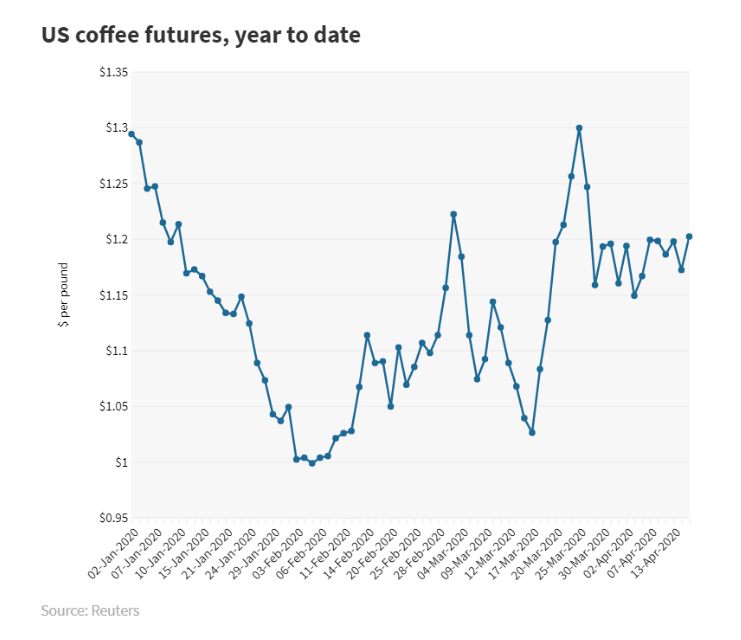 Coffee importers are stockpiling as well, per Reuters.

Carlos de Valdenbro, Colombia country director for specialty exporter Caravela Coffee, was concerned about requests for faster shipments despite the majority of the countries still have an ample supply of coffee as he adds:

“We had requests from buyers in all major countries, U.S., Japan, Germany […] Basically all the largest roasters in the world. They want to have the beans there quicker, just in case.”

While shippers are also struggling with quarantines at ports and crew shortages, other countries in effect are facing a couple of logistics problems since the coronavirus shutdown.

Aside from the oil fiasco that has been going on for the week, it looks like this particular sector may have been overlooked.

The Food and Agriculture Organization of the United Nations (FAO) elaborated on the implications of global food security through their Q&A on their website.

FAO mentions that there have been challenges in terms of logistics where they are having a hard time moving food from point A to point B, which is also a factor for increasing prices. They are also expecting disruptions in the food supply chains for April-May.

In terms of food prices, they are seeing declines in some major food staples such as palm oil and maize. Rice is seen rising and it’s linked to the export restrictions of a key exporter.

For major concerns from the rural farmers in the agricultural sector, the FAO also projects that in the next few months, once the downward demand shock increases, prices should go down.