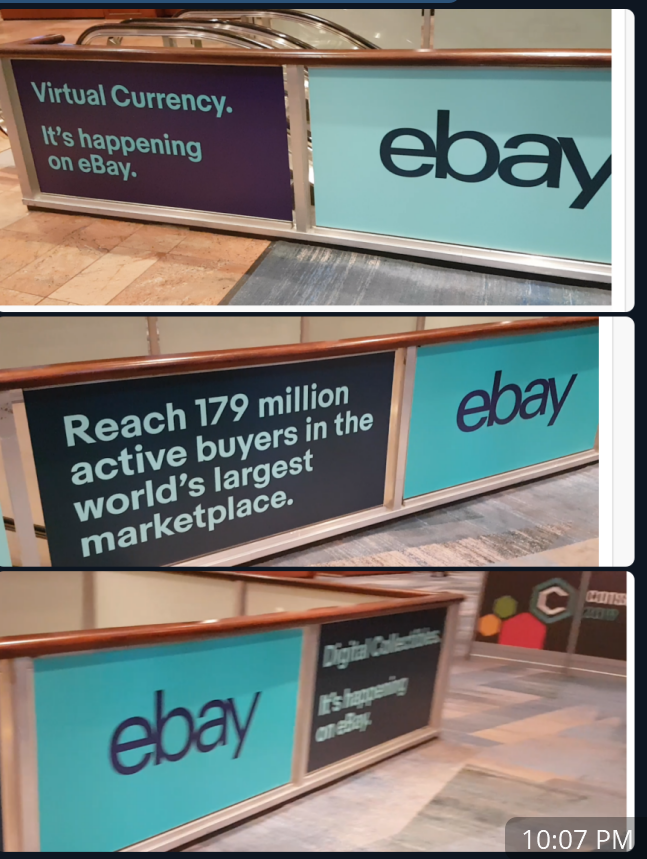 Advertisements at Consusus 2019 in New York have sparked fevered speculation that eBay will soon accept crypto and Bitcoin.

The advertisements are fairly cryptic but have been seized upon as proof the eCommerce giant – which has long expressed interest in crypto – would finally bring on crypto payments soon.

If true, this would be huge news for mainstream adoption as eBay is one of the world’s largest marketplaces, with 180 million active buyers from around the globe.

eBay is one of the sponsors of Consensus 2019 and the pics have sent crypto Twitter into a frenzy of speculation. There are *totally* unconfirmed rumours that eBay will accept Binance Coin.

It’s not hard to imagine that one of the first partnership Kon would attempt to make would be at the company she was a senior executive at for five years.

Pretty sure these guys will be announcing a partnership with ebay.

They seem to create a solution for many currencies.

Might not be a singular coin supported, but rather bullish news for crypto in general. pic.twitter.com/XOhGbnaK3G

Kon was most recently Head of Marketplaces and Large Enterprise Partnerships for PayPal in the UK and previously worked for eBay in Italy and the UK from 2013 to 2017 in a variety of roles including Head of European Partnerships, based in London.

UTRUST accepts multiple cryptocurrencies which it converts for merchants at the point of sale into fiat, crediting their bank accounts with USD, Euros or British Pounds. It’s a low cost service too with 1% payment fees for merchants.

However it’s still a fairly new startup and is yet to even launch its beta wallet – so if UTRUST is the partner, then don’t hold your breath.

eBay has been looking at crypto for some time

eBay has certainly been contemplating accepting Bitcoin and other currencies for some time.

In December 2017 Scott Cutler, Senior Vice President of eBay Americas told Yahoo Finance the eCommerce retailer is “seriously considering” accepting bitcoin payments but noted the company is “not quite there yet.”

Earlier this week PayPal CFO John Rainey told Yahoo Finance it was “too early” for the company to offer Bitcoin payments as the merchant experience was sub optimal due to market volatility. He said it was “blockchain not Bitcoin,” which excited executives.

“What we saw because of the instability of the currency – the fact that there was so much volatility from one day to the next – if a merchant accepted that, they would quickly convert it into a more stable currency like the euro or US dollar,” he said.

“And so there wasn’t a lot of appetite for that… We have teams working on blockchain and cryptocurrency as well, and we want to take part in that in whatever form that takes in the future – I just think it’s a little early on right now (for Bitcoin).”

Of course, it could all be much ado about nothing. The phrase: “Virtual Currency. It’s happening on eBay” could simply refer to the existing “Virtual Currency” category on eBay that offers users an anonymous way to buy and sell cryptocurrency for fiat.

Which would be very disappointing.

If you’re thinking about buying and selling crypto on eBay, remember it’s beset with risk as numerous sellers have no reputation score or reviews. And whatever you do, eBay is no place to buy failed ICO projects that are for sale.

UPDATE, May 16 – eBay has put out a statement saying “Cryptocurrency is not accepted as a form of payment on the eBay platform, nor is it part of our payments strategy.”

This would be huge for me and my Ebay business. Would love to not pay PayPal 2.9%. Please say it's so.