The world is facing a multi-trillion-dollar black hole from negative yield debt. Some experts believe it could be a catalyst that helps push Bitcoin to new heights.

Negative yielding debt – bonds worth less, not more, if held to maturity – has doubled since December, topping $13 trillion in June.

According to a report in Bloomberg, “The Black Hole Engulfing the World’s Bond Markets,” it now accounts for 25 percent of global debt.

In Germany, 85% of the government bond market is under water and investors effectively pay the German government 0.2% for the privilege of buying its benchmark bonds.

“The government keeps 2 euros for every 1,000 euros borrowed over a period of 10 years,” reporter John Ainger noted.

How did this happen?

Interest rates were cut below zero by several of Europe’s central banks in 2014 in an attempt to spur growth. Soon followed by Japan, the measure was meant to be temporary but hasn’t worked out that way.

Negative rates fly in the face of the basic principles of the global financial system – namely if you lend money for longer you should see a higher rate of return.

There are a bunch of negative outcomes: pension funds and insurers can no longer get access to safe returns, bank margins are squeezed, and if they decide to restrict lending, that could hasten any slowdown.

Governments are also much more likely to run up ever larger debts as they are effectively being paid to do so.

And investors could be forced to make riskier bets in the hunt for returns, raising the chances of bubbles in financial markets or real estate.

For ordinary people in increasingly cashless European societies, they have no way to store money in the bank without paying both fees and interest.

The idea is to encourage people to spend, but wealthy people instead accumulate assets like gold, silver, real estate, shares and, increasingly, cryptocurrency. 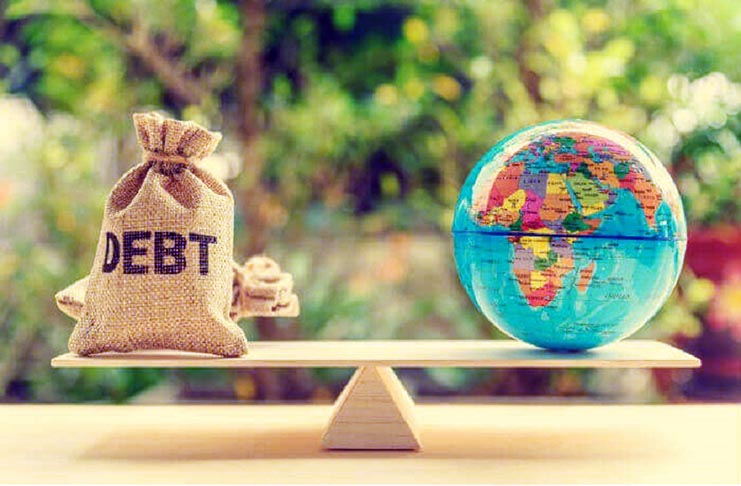 The multitrillion-dollar black hole was the major topic of discussion on this week’s Keiser Report.

“Global debt is 350% of global GDP so the globe can never generate enough growth to pay down the debt,” he said.

“The debt is now running away, it is compounding itself and becoming a black hole of debt, to the point now where governments are issuing bonds that are guaranteed to lose money

Co-host Stacy Herbert likened it to “messing with the laws of physics.”

“Negative rates are not meant to happen,” Herbert said, adding, “This is an important reason why the gold market is back in a bull market but also the existence of Bitcoin.”

They both compared the situation to the lead up to the Global Financial Crisis – the fallout from which produced Bitcoin in the first place.

Keiser and Herbert drew a line between the US abandoning the gold standard in 1971, and the explosive growth in debt.

“The gold standard introduces a barrier you can’t move around. It is universally understood to have a value, Keiser said.

“When you remove that, as happened in 1971, you’re replacing gold with hubris … we’re on the hubris standard.

“Bitcoin is a restoration of hard money, sound money in our economy which we haven’t had since 1971.”

European banks preparing to load up on gold

Following the show, Keiser tweeted an article about European bankers preparing to buy large amounts of gold with the expiration of the Central Bank Gold Agreement.

“Central Banks will struggle to find enough gold to satisfy demand (even at $2,500 an Oz), so they will turn to #Bitcoin to fulfill their need for Hard Money.

There were fresh reports this week the European Central Bank is set to deliver another round of stimulus in September to combat a severe economic slowdown, including potential interest rate cuts and quantitative easing.

Commenting on the reports, Pompliano tweeted: “ROCKET FUEL: They’re going to cut rates and print money right as we march towards the Bitcoin halving. Buckle up. This will be wild”

ROCKET FUEL: They’re going to cut rates and print money right as we march towards the Bitcoin halving.

Buckle up. This will be wild ???? pic.twitter.com/QotDXKTJRj

Ben Affleck encouraging Jennifer Lopez to elope to Mexico for their...