Ethereum regained ground overnight – will the rise continue thanks to surging interest worldwide, or will ETH face a dreaded ‘death cross’?

Ethereum has faced a horror July, dropping as much as 45% over the course of a month.

But overnight it showed signs of life, spiking from $193 to $219 in the space of four hours.

Other altcoins experienced a similar rise, including Litecoin and XRP, in a rally that added $10 billion to the crypto market cap in a few hours.

Still, it’s a little rise after a BIG drop

Still, the sudden surge only provides faint cause for optimism given the second most popular cryptocurrency has suffered a series of sharp falls since last week when it was trading at $315.

And it’s well down on late June when it was trading at $346.

The question is: will Ethereum regain its losses or is it heading back under $200?

CoinRivet warned of the downside yesterday: “The 200 EMA is currently sitting at around $220, but a rally would need to happen within the next week to avoid the dreaded death cross, which would see the 100 and 55 EMAs cross to the downside.”

(It experienced a ‘golden cross‘ back in May’)

Altcoins have been in a world of pain recently as Bitcoin dominance has neared 70%. And Bitcoin itself has struggled to shake off heavy negativity from the President, the Federal Reserve and The Treasury. 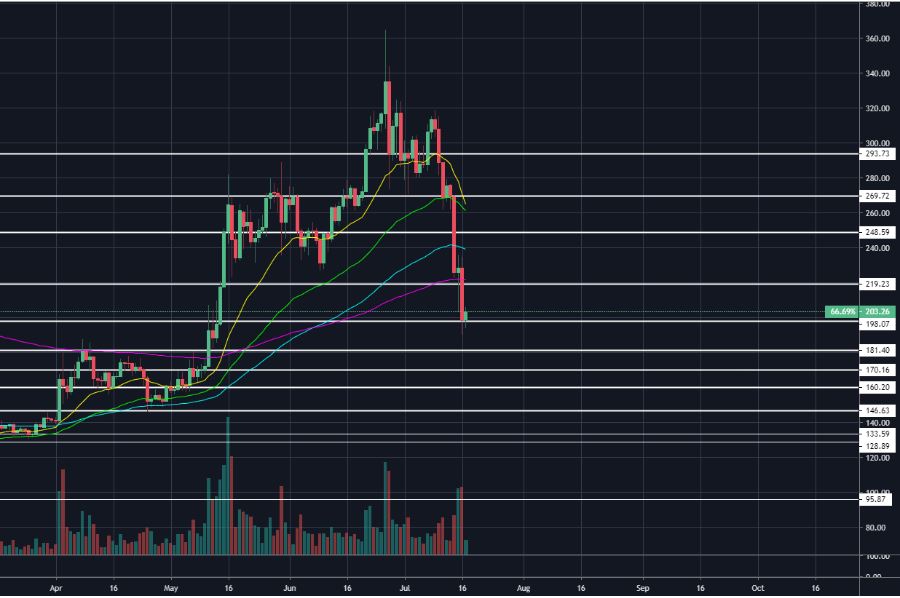 The good news is that Ethereum’s price drop has netted it some significant attention and Google Trends shows that searches for Ethereum are at their highest level since February 2018.

“I would be surprised if we don’t see at least 50% increase for ETH in next 5 days,” @Journeyto100k_ forecast.

Ethereum is at higher peak interest in trends than any other crypto. Also China at one of the top for interest… Something big coming for ETH?? I would be surprised if we don't see at least 50% increase for ETH in next 5 days.#Ethereum #ETH $ETH #Crypto #Bitcoin pic.twitter.com/YIDPSy4hwt

It’s hard to know what to make of the increase in interest in China, given Google is officially banned there.

Ethereum Ask Me Anything

The spike in interest in Ethereum Google searches also comes after the Ethereum 2.0 Researchers AMA session held by developers over the weekend.

Co founder Vitalik Buterin is particularly bullish about the chances of Ethereum 2.0 solving the scalability issues that plague the existing blockchain.

Some of the most important takeaways from the Ethereum 2.0 Researchers AMA today. Note, some comments are cut down to fit in tweets.

1. @VitalikButerin on unsolved challenges: "I really honestly think that there are no unsolved research challenges at this point."

“I really honestly think that there are no unsolved research challenges at this point,” he said.

He predicted Transactions Per Second will increase from around 15 TPS today to: “Somewhere between 5000 and 500000 TPS depending on what execution environment and transaction type you’re using.”

Buterin’s idea of using the Bitcoin Cash blockchain in the short term as a measure to address scalability has not been well received however.