Crusader Kings 3 is rearing for a release this coming September 1.

Game publisher Paradox Interactive revealed the date today, together with the game’s trailer. Players who are looking to play Crusader Kings 3 should be ready for the responsibility of their fiefdom.

Fans will take charge of the fate of a medieval dynasty and handle its affairs, a la Game of Thrones. Fans can expect treachery, war, and deceit at every corner.

Crusader Kings will keep its systems familiar for the third installment

Returning players from the previous Crusader Kings installments will feel familiar with everything. Apart from the constant lines of people trying to kill the player, the gameplay and general feel should be the same.

CK3 will remove very little from the original installments or the tons of content the franchise gathered over the years. Players can straight up start ruling their prepared kingdoms, from a principality in Wallachia to a burgeoning dynasty in Jerusalem.

While Crusader Kings was a massive game before, CK3 promises to be more expansive. Everything in this third installment includes all the good things in every Kings game ever. Instead of getting it in pieces, everything is on a single, neat package.

For new players, the game will also be easy to navigate if they have a general idea of how 4X RTS strategies work. For the uninitiated, much of the interface looks something found in Civilization.

There are tooltips and menus at almost every corner. With that said, the tutorial is thorough, albeit a little on the boring side. Everything is concise and straightforward, with nested tooltips further down until the player needs them.

CK3 is easy to learn but hard to master

For players who are planning to play Crusader Kings 3, the easiest way to learn is explore. Playing around with the controls, messing about within the world, and learning through mistakes is the best way to enjoy. 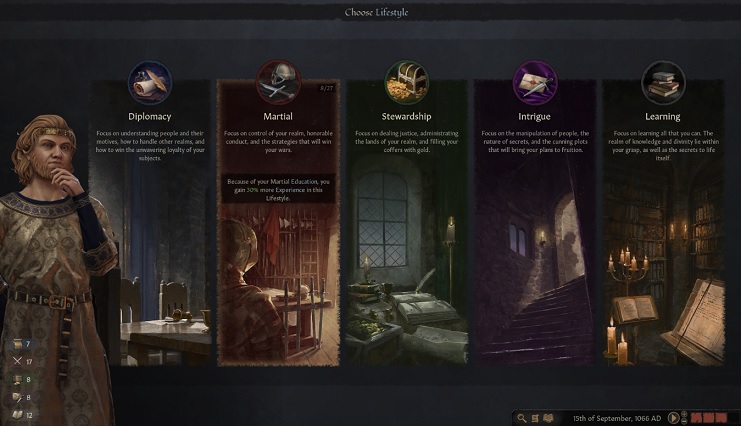 The only pervasive system in CK3 that needs a little bit of extra learning is the lifestyle system. This system gives much of the game’s feel and RPG elements. Solid knowledge of that process is more than enough to be a mediocre king.

As with all medieval games, fans of the game would need to know how to weave themselves through court intrigue. Bribery and good judgment is commonplace across the world.

Crusader Kings 3 will be available on Steam, the Microsoft Store, and the Paradox Store. The game retails at $49.99 for the base game and $74.99 for the game and the expansion pass.