A post making fun of Blockstream’s Samson Mow has sparked a Twitterstorm over accusations of misogyny. Was it funny or just ‘sexist garbage’?

Blockstream CSO Samson Mow has taken aim at a meme posted by Twitter user Davis (@Karbonbased), saying the post “crosses a line” and is “sexist garbage”.

The offending post features an image of Mow lovingly clutching a Transformers toy box, juxtaposed with an image of his partner Lina Seiche posing with a muscle bound friend at the gym.

The text reads: ‘You vs the guy she tells you not to worry about’ and is a spin on a popular internet meme dating back to 2015.

Mow wrote: “At first glance it’s funny. Lots of likes. But it’s actually very sexist and creepy AF. This guy Davis has been harassing Lina for months and stalks her social media. I don’t mind getting memed and poked fun at … but this post crosses a line.”

It’s the second Crypto Twitterstorm over social justice this week, after podcaster Andreas Antonopoulos received a torrent of criticism for merely suggesting he wanted to appear on some podcasts that weren’t hosted by white male Americans.

At first glance this looks funny. Lots of likes. But it’s actually very sexist & creepy AF. This guy Davis has been harassing Lina for months & stalks her social media. I don’t mind getting memed & poked fun at (after r/btc, this is nothing), but this post crosses a line. Thread. pic.twitter.com/Kxr96P2zfB

Huh? What is sexist?

Mow’s salvo sparked a heated debate and more than a little puzzlement from some Twitter users who said they couldn’t actually work out what was supposed to be misogynistic.

“Can someone explain what is sexist here?” asked CryptoDeleted.

“It’s not sexist. It’s not creepy. You just got memed. Hard,” wrote Crypto Bitlord, who suggested Mow had resorted to playing the “racism, sexism, hate speech card’ after being “memed so hard.”

Mow blocked him and numerous others during the debate.

Thinly veiled message in the meme

“The meme is a common one. But Davis has to add an extra misogynistic spin to it, digging up an old photo of Lina and her gym friend. The not so thinly veiled message he’s sending is ‘she’s shallow and easy’.

The debate continued over the weekend with many suggesting a) Mow had invited the criticism by often posting about their relationship online (Mow said that was akin to victim blaming) and b) that it was ironic that a self declared ‘toxic maximalist’ would act morally superior.

Santsiri said “With all respect, you should reflect on this. Your Twitter content is plagued with snarky memes and you brag about being toxic. This is how toxicity feels in the receiving end’

PS There’s nothing sexist in a joke like that, only poking fun on a nerd.”

He was also blocked. 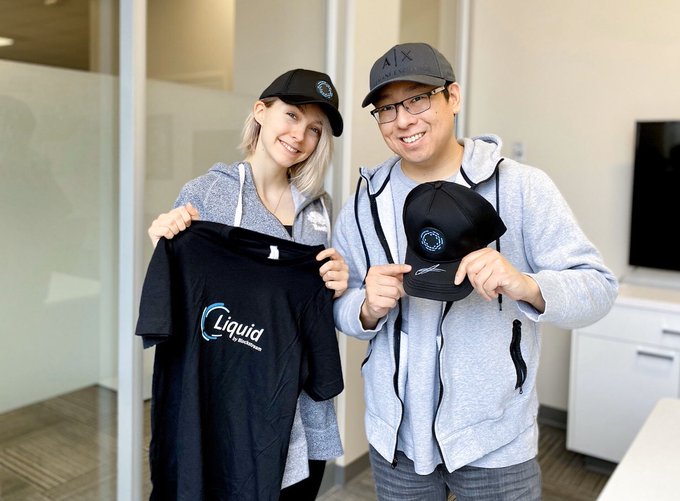 Mow’s partner Lina Seiche, the Global Marketing Director for BTSE.com, weighed in to support him.

“Sad to see some of the responses,” she wrote.

“There’s no misunderstanding the original tweet. It’s intentionally sexist. If you find that funny, so be it. But if you think it’s funny to attack or ridicule Samson for calling out the tweet’s sexist nature, you’re just as bad, if not worse.”

Mow was also supported by prominent Bitcoin podcaster Peter McCormack and others.

“Someone posted a pic of my wife with this same caption I would bitch slap him on stage at the next conference,” wrote Twobitidiot.

“Out of context the meme was humorous, but understanding the harassment, it’s just sad. Sorry that you both have to deal with him,” MrCoolBp wrote.

After my initial tweet someone DM’d me saying my post would draw more attention. That was the goal: to bring attention to sexist and creepy behavior so it’s discouraged, and make people actually think about something instead of allowing it because “it’s just a meme dude.”

Davis denied the accusations of stalking and harassment and challenged Mow to provide evidence he had done so.

He responded to the furore by doubling down with yet another meme, posting a photoshopped picture of a sale of commemorative baseball caps. They feature Mow holding up a sign saying ‘It’s sexist’.

‘The #It’sSexist hat you’ve all been waiting for. Making memes? Well, you’re sexist…. Getting roasted only but insecure as f—? Kinda sexist. Can dish it but can’t take it? Super sexist.”

He also retweeted a post by @nixops which said: “If memes and words upset you, you aren’t ready for a censorship-free internet.”

These guys move fast with the merch production, damn ???? pic.twitter.com/mi9O8vI9hp