Cyberpunk 2077 will have no shortage of DLCs once the game arrives.

Cyberpunk 2077 is easily one of the most anticipated games of the year, and when it does arrive, CD Projekt Red says that the game would get as much downloadable content as The Witcher 3: Wild Hunt. More than that, fans don’t have to wait for the game’s release for information on the DLCs because the developers would be rolling out details even before Cyberpunk 2077’s launch.

In a Q and A with CD Projekt Red and as reported by Video Games Chronicle, company president Adam Kicínski says Cyberpunk 2077 will have as much DLCs as The Witcher 3.

For those who have played The Witcher 3, it should be remembered that the game had two massive expansions, namely Heart of Stone and Blood and Wine. More than that, in between those expansions, The Witcher 3 also released a number of minor DLCs for the players to enjoy. In fact, new quests, equipment, and loads of other items were released weekly after the game was released.

If Cyberpunk 2077 will follow The Witcher 3 format of releasing DLCs, this means fans can expect to see two paid massive DLCs and loads of free updates that aim to expand the game even more.

However, if one were to base on The Witcher 3, the release of these DLCs may take quite a while. When The Witcher 3 was released in May 2015, it took five months before the Heart of Stone DLC was released. The second major DLC, Blood and Wine, was released seven months after.

On a positive note, those DLCs were well worth the wait.

DLCs aren’t the only thing CD Projekt Red is working on for Cyberpunk 2077. They had also revealed that a multiplayer mode for the game is also in development. However, it would be treated as its own AAA-release with 2022 being a possible launch year.

“In terms of multiplayer, one thing we need to make clear is the triple-A release we’re working on in parallel with CP2077 is Cyberpunk multiplayer… I think president Adam Kicínski was alluding to this, that things are going to be moving. Given the expected release of Cyberpunk 2077 in September, and frankly speaking the series of events which we expect to occur after that date, 2021 appears unlikely as a release date for the Cyberpunk multiplayer,” CD Projekt Red says in their audio webcast. 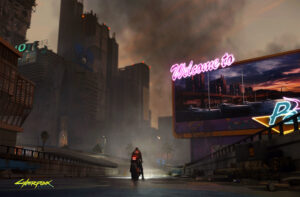 Despite the coronavirus pandemic and the development team’s switch to a remote work setting, Cyberpunk 2077 is now in its later stages of development. With this, they are expecting an on-schedule release on September 17, 2020.

More than that, it was revealed that once the Xbox Series X console is released, there would be a next-gen upgrade for the game but not in the near future.