The week so far has been very productive for altcoins with many of them enjoying rare double digit gains. Privacy coin Dash has been among them but what has caused it to spike?

At the beginning of this week, Dash was priced at just $65 and was suffering along with the rest of its brethren as the altcoin bear market dragged on.

All of a sudden the altcoins exploded with Bitcoin’s two rival hard forks notching up some of the biggest gains of the day.

BCH and BSV were not the only big movers of the day as Dash literally skyrocketed over 115% since Monday to top out at $140. 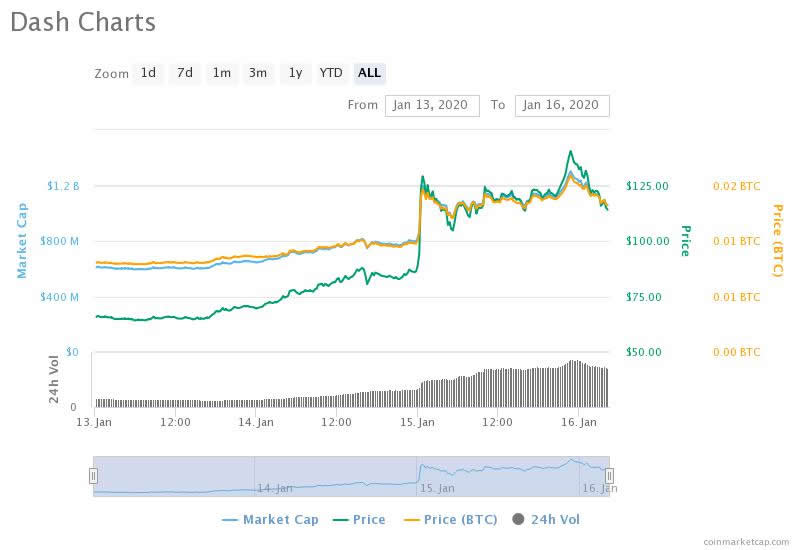 The move has taken the privacy coin back to its highest level since July 2019. Market capitalization surged to $1.2 billion as Dash powered up the coin cap charts.

At the time of writing the top altcoins were all correcting aside from Dash and Ethereum Classic which were both still in the green.

Elliot Wave analysts have observed that the pump is actually steeper than that in 2017.

As impressive as that looks though, the crypto asset is still over 90% down from its all-time high of $1,600.

What caused the price of Dash to pump?

As prices cranked ever higher a discussion unfolded on Reddit with suggestions to explain it.

There have been a number of fundamental developments recently such as the deployment of several Dash Improvement Proposals (DIPs) to improve the network and introduce new functionality.

The formation of a Dash Investment Foundation would have also been bullish as it provides a financial bridge between Dash’s decentralized stakeholder network and forward-thinking entrepreneurs and businesses.

Dash Evolution has reached evonet which is a stage before mainnet launch. It is a network upgrade that plans to make crypto payments easier for users by introducing usernames and profiles in the protocol.

Additionally, the Electrum Dash PrivateSend wallet is now on TestNet.

We are proud to announce the release of Dash Platform on Evonet, our public testing environment for Evolution features. https://t.co/nx408jNoE8 pic.twitter.com/IwehZufufm

Developments in South America have also caught the attention of investors.

A recent internet shutdown in Venezuela ahead of a National Assembly leadership vote also appears to have played a role in the price pump.

Dash is one of the most popular crypto coins in the economically encumbered Latin American nation.

As hyperinflation soars, savvy investors have turned to crypto as a safe haven and Dash appears to be their weapon of choice as more vendors are accepting it.

Dash SMS wallets and text services continued to operate during internet blackout which has added to the momentum.