Legendary video game director Hideo Kojima‘s epic action title Death Stranding was originally released as a PlayStation 4 exclusive back in November 2019, with the bizarre title-winning several accolades and many critics singing its praises.

Late last year, developer Kojima Productions announced that the game would be heading to PC in the summer of 2020. Initially, the Japanese studio set its sights on a June 2020 release date but was later moved to July 14 due to the coronavirus pandemic.

With just a bit over a month left before Death Stranding’s PC release, Kojima Productions has finally revealed the base specs to get the game running, and the recommended hardware for running the game at 30 and 60 frames per second (fps).

To get that game running at a steady 30 fps on a 1280×720 resolution, gamers will need at least the following specs:

Death Stranding’s minimum requirements are pretty low, but since the game is known for its graphical excellence, it may turn out to be quite jarring on the lowest graphical settings and a resolution of 1280×720.

With Death Stranding being an open-world game (known for being processor intensive), its 60 fps recommended hardware is surprisingly modest considering how beautifully crafted the title is.

Kojima Productions haven’t revealed any information so far about 4K options and ultra-widescreen, though running the game with those settings will require a much beefier setup. 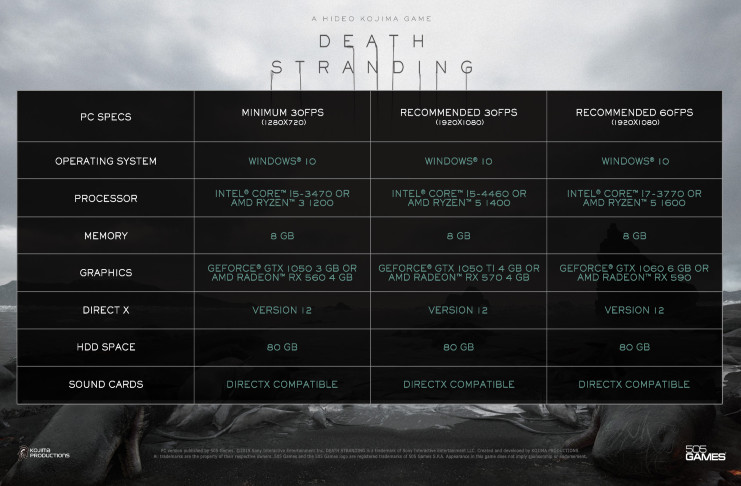 Since Death Stranding was Hideo Kojima’s first release after his public falling out with Japanese video game company Konami, expectations were high following the game’s announcement at E3 2016.

Fortunately, Kojima and his team were able to deliver, with the title debuting to mostly positive reviews. Death Stranding was unanimously praised for its out-of-the-box concepts, stunning graphics, and stellar voice acting.

The action/adventure title was criticized, however, for its one-dimensional line of quests, and how boring all the walking can sometimes be.

For gamers who are interested in Death Stranding’s PC version but whose PCs aren’t quite up to snuff, they’ve got a month to put together some upgrades before the port’s July 14 release.

Image [1] and [2] courtesy of Kojima Productions/Twitter