Miners started hodling in Jan – some say it preceded the crash, other say miners expect a price spike. But events have overtaken the debate.

Data from ByteTree shows that miner inventory levels averaged 79 percent in January – meaning they were hanging on to their block rewards. They mined 53,955 coins across the month but only sold 42,451 of them.

Any figure over 100 means they’re selling off everything as well as their hoarded coins.

January was the weakest MRI in two years and some argue it was a warning sign this year’s Bitcoin price spike wasn’t built on solid foundations.

Debate rages over what this means – if anything.

On this view miners hoarding means they’re concerned the market is too soft to sell into. By contrast, if they start flogging off coins as well as the backlog, that means they are very confident that prices are good and strong.

“Historically, that has coincided with negative returns and reflects a weaker market bid. Miners are hoarding because they want to protect the market which is too soft to sell into,”  Morris tweeted.

“It’s counter intuitive. Easy to assume they hang on if bullish, but recall they are running their businesses for cash. In my opinion, miners are sharp cookies and know the market well. They sell when they can.”

Or miners are waiting to sell later. A bullish bet. With only 1,800 produced per day and hugely distributed. Nah, not buying the hoarding theory.

However, correlation is not causality and some argue that miners may only be holding onto coins in expectation of much higher prices post halving.

“I’ve talked to a lot of miners around the world, a lot of them have said they have sold enough Bitcoin to get us through the next year or so and we are going to hoard Bitcoin at this point in time and we are not going to sell it and the supply of Bitcoin will get cut in half,” he said at the time.

That’s also one reason advanced for the hash rate hitting an all time high – because miners are throwing more and more resources into mining.

Why would they do that without expecting a big price rise this year? That’s the only way they can hope to make money once the block reward halves.

An alternate explanation is they are acting similar to the old joke which goes ‘I don’t need to outrun the bear, I just need to outrun you’. In other words they’re positioning themselves to be among the miners still efficient enough to operate with 50% of current rewards while other miners go bust.

Actually that sounds intuitive, they want to hold before the halvening and make sure the price will not be lower than today.

As it happens, this is one of those debates that has already been outrun by events: for the past five weeks miners have been selling off more than they mine at an MRI of 104 – and they’ve been selling more over the past week and day too.

So if Morris is right, then the fact miners and now selling off more than they earn is a very bullish sign. 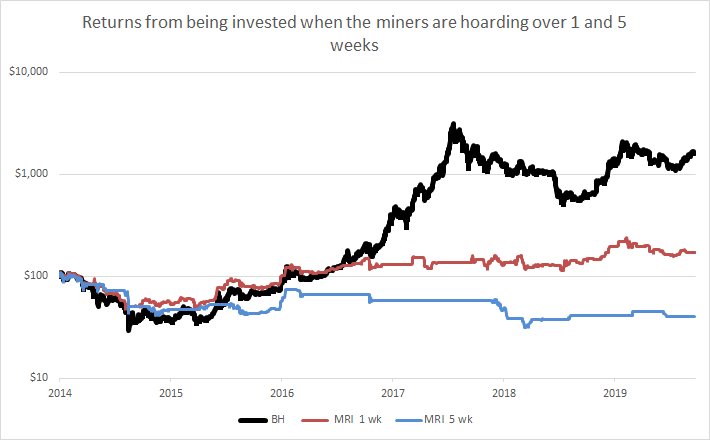 Xiao Yang CEO of PandaMiner told CoinDesk he was optimistic about the price over the medium and long term.

“Despite short-term volatility, we expect to see market demand at a relatively high level while it is getting harder to mine bitcoins from the supply side,” he said, adding that miners saw the recent price crash as correlated to the stock market and nothing to worry about.

“We are still focused on long-term price increase and not too concerned about short-term market moves,” Yang said.

What Naughty Dog could announce for ‘The Last of Us 2’...

NBA offseason, 3 player signings to look out for