The positive streak was snapped due to a recent report from STAT News about Moderna’s initial clinical trial not producing critical data about the effectiveness of the vaccine against COVID-19 just an hour before the trading session ended.

The retail sector suffered a blow with major market movers such as Home Depot losing three percent and Walmart dropping 2.1%.

Home Depot sales rising by 7% were not enough to maintain the positive market sentiment due to the coronavirus pandemic.

As for Walmart, its e-commerce soared as high as 74%, and its store sales gained by 10% according to their first-quarter report. A recent report on consumer behavior in the U.S. may have also influenced its rise.

However, U.S. stock futures in overnight trading rebounded hoping for another Dow Jones recovery rally for later’s trading day. Global markets are now currently mixed after the Asian markets reacted positively to the vaccine trial the other day.

On CNBC’s Mad Money, Jim Cramer was able to pull out a chart from Carolyn Boroden, a Fibonacci technician who handles FibonacciQueen.com as well as a contributor to RealMoney.com.

According to her analysis, as the Mad Money host explains, the charts suggest that the major averages still indicate signs of a rally but investors should be cautious if it fails to break out from the 3,000 levels. 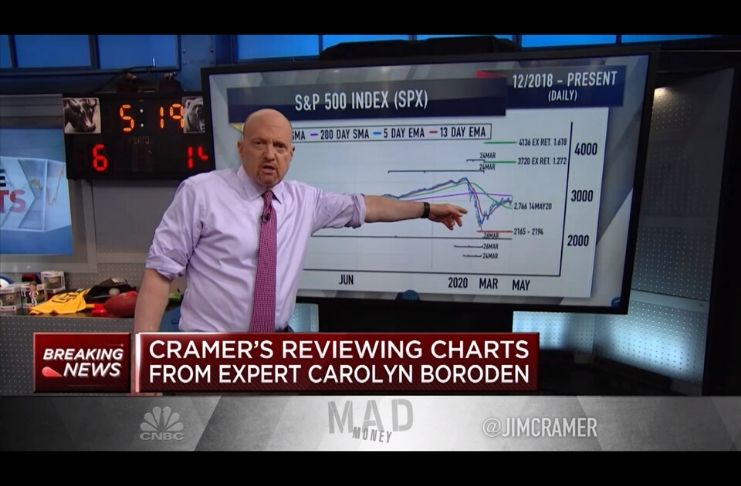 Cramer explains further to his viewers:

“She thinks the S&P is a buy right here. There’s too much going right in her charts for her to say anything else […] However, she (Boroden) says you should be ready to sell if we fail to break out over the 200-day moving average, eventually.”

He observes that while the Dow Jones has been receiving traditional give-backs from energy and financials, the defensive sectors were falling by 1.2% to 1.85%. Also, he says that Tech and Comms had another great day in the markets further reinforcing their presence of being a defensive stock market play.

In addition, Fed Chairman Jerome Powell and Treasury Secretary Steven Mnuchin claimed that the Treasury and the Fed are “fully prepared to take losses” on what’s left of the capital from the coronavirus bailouts in their last testimony to the Senate Banking Committee on Tuesday.

Mnuchin further added that the Treasury is willing to shell out its US$500 billion [AU$763 billion] to distribute to struggling businesses affected by the coronavirus pandemic.

As optimism continues to surge on Wall Street, the Dow Jones may be in for a win or lose situation once coronavirus developments become clearer down the road.