Dutch celebrity Jort Kelder has destroyed a Bitcoin conman using his ‘endorsement’ to scam people, in a dramatic on air confrontation.

The Czech Bitcoin scammer didn’t know what hit him when he was confronted by Dutch journalist and TV presenter Jort Kelder in video broadcast by current affairs program Brandpunt + yesterday.

Kelder told the conman: “You used my head for this internet scam!”

Kelder has also announced he is setting up a foundation for celebrities to take legal action against social media, search and news sites that publish the scam ads.

Brandpunt + launched an undercover investigation into the fake celebrity Bitcoin scams in August.

The ads mirror English language scams (and may be from the same people) that use fake news stories from fake credible sites ‘reporting’ that celebrities have invested in their Bitcoin scams.

The scams are believed to have netted tens of millions. 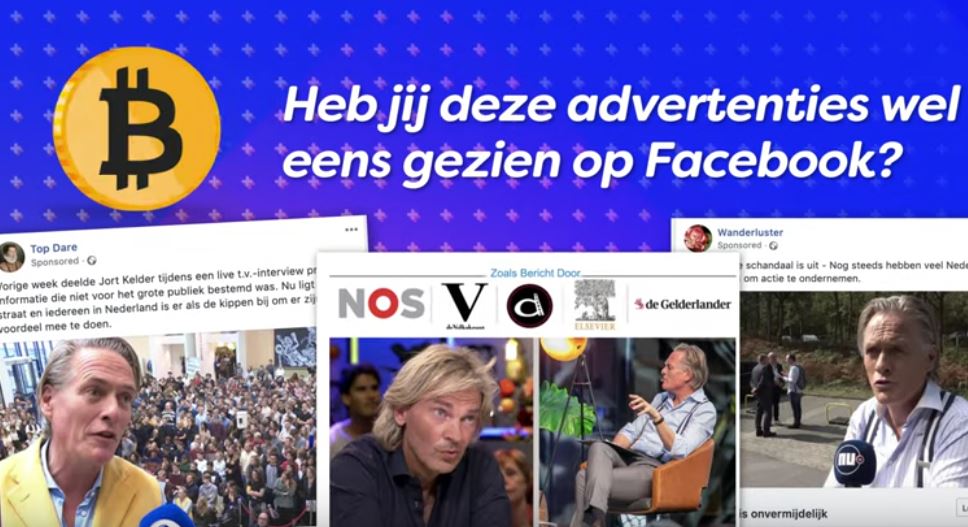 Micky reported in late September of one woman who alone lost $670,000 after being taken in by fake news stories claiming the endorsement of Aussie billionaire Andrew “Twiggy Forrest.

Brandput + discovered an international network comprised of thousands of rogue advertisers is behind the scams.

Everyone from Hollywood star Hugh Jackman to TV presenter Karl Stefanovic have been roped in – with the scammers targeting big names alongside country-specific celebrities including Dutch TV presenter Matthijs van Nieuwkerk and Dutch rapper Ali B.

Tracking the scammers down

Brandpunt + discovered that a marketing company called the Czech Converting Team has been promoting fake news stories about Kelder with headlines like: “The most recent investment from Jort Kelder surprises experts and frightens large banks!”

They tricked one of the con artists into accepting a Skype call, and then sprung Kelder on him.

“If you take a closer look, I’m Jort Kelder and you used my head for this internet scam,” Kelder tells the conman.

The scammer immediately turns the webcam away from his face, but by then it is too late.

“My question to you is ‘Why do you use all of these famous people? You rob poor people of their money,” Kelder says.

“I believe you’re calling to the wrong place man,” the conman protests.

Kelder advises him to “stop this kind of business” and then in a drop the mic moment says:

Celebs to team up to sue in new foundation

Kelder has announced he will also take civil action against the company and is setting up a new foundation for Dutch celebrities to sue social media and online sites profiting from ads claiming fake celebrity endorsement.

Sites targeted include Google and Facebook along with Dutch news site De Telegraaf and Algemeen Dagblad.

Kelder hopes to join forces with Dutch Big Brother creator John de Mol who launched proceedings against Facebook in May over the scam ads.

“We will address all parties that have published such an advertisement,” said Kelder.

The foundation will sue publishers for compensation and try and end the practice.

“Bizarre” that sites do nothing to stop it

“I think it’s bizarre that they don’t take this problem seriously,” Kelder said. “They just make money from it, so you expect them to do more about it. ”

“This joke is already going to cost me thousands of euros, for the time being the gear is tough, but I think someone should put the brakes on.”

*While the confrontation with the scam artist was in English, other details and quotes have been taken from auto-translated text so there may be some small errors.