Ellen DeGeneres, recently, faced backlash for comparing her home to jail during the coronavirus lockdown.

Ellen DeGeneres revealed what it’s like to be in quarantine for several weeks during a recent episode of the Ellen Show.

“This is like being in jail is what it is. It’s mostly because I’ve been wearing the same clothes for 10 days and everyone here is gay,” she said.

By the looks of it, DeGeneres was trying to make light of the situation. However, her statement drew criticisms especially after she earned the moniker, “one of the meanest people alive.” 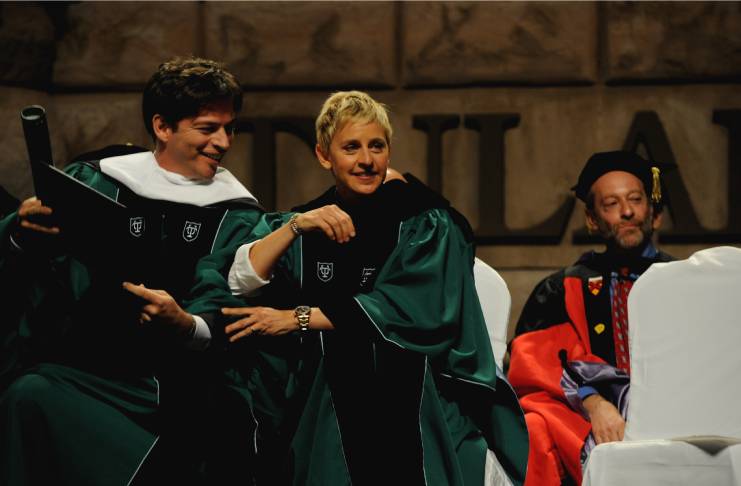 But criticisms about DeGeneres have existed for years. In 2008, Portia de Rossi’s wife was slammed for forcing Mariah Carey to confirm her pregnancy on her talk show.

DeGeneres asked the “Hero” singer straight out if she’s expecting when she appeared on the Ellen Show. Carey initially refused to answer the question, so the comedian asked her to drink alcohol.

Pregnant women, especially those in their first trimester, should avoid drinking alcohol. After all, doing so could put their unborn child at risk.

Since Carey refused to take a sip from the glass, DeGeneres suggested that she’s expecting. Weeks later, the award-winning singer announced that she suffered a miscarriage.

Last year, Fifty Shades of Grey star Dakota Johnson called out DeGeneres in front of her guests on the Ellen Show. The funny woman asked why she wasn’t invited to Johnson’s birthday party.

However, the actress said that she invited Ellen DeGeneres. Unfortunately, she was the one that didn’t attend her birthday celebration. DeGeneres insisted that she didn’t receive an invitation, so Johnson asked one of the producers of the talk show to confirm her side of the story.

Ellen Show co-executive producer Jonathan Norman sided with Johnson. He said that  DeGeneres received an invitation to Johnson’s party. And this was the only time that the comedian stopped arguing with the Fifty Shades Freed star.

After DeGeneres hung out with George W. Bush at a Dallas Cowboys game, Mark Ruffalo expressed his disappointment in the comedian. Days later, she reminded her supporters of the importance of being kind.

DeGeneres said that Bush is her friend even though they don’t share the same beliefs. However, Ruffalo didn’t think that the host’s explanation made any sense.

“Sorry, until George W. Bush is brought to justice for the crimes of the Iraq War (including American lead torture), Iraqi deaths & displacement, and the deep scars – emotional & otherwise – inflicted on our military that served his folly), we can’t even begin to talk about kindness,” he tweeted.