Ellen DeGeneres and Portia de Rossi are joining their friends and co-celebrities in the All In Challenge. Aside from donations, one fan will also become a co-host for a day on The Ellen Show.

Ellen DeGeneres recently announced that she and her wife, Portia de Rossi, will donate AUD$1.5 million to the All In Challenge. After receiving a nomination from Leonardo DiCaprio and Robert De Niro, the couple reportedly felt inspired to take part.

The All In Challenge

According to Parade, the All In Challenge just recently emerged when Fanatics founder, Michael Rubin has put together the campaign. As stated, it is a fundraising campaign targeting celebrities from various industries. Aside from actors and artists, athletes and “moguls are also encouraged to participate.

Those who are taking part in the challenge will reportedly donate amounts or valuable items to raise $100 million. All proceeds will go to non-profit organizations that support individuals and communities amid the COVID-19 crisis in the United States. As revealed, some of the organizations include Meals on Wheels, America’s Food Fund, No Kid Hungry, and World Central Kitchen.

In a report released by People, Ellen DeGeneres reportedly shared that she has been feeling “devastated.” She said that she cries every time she sees people lining up, “waiting for food.” 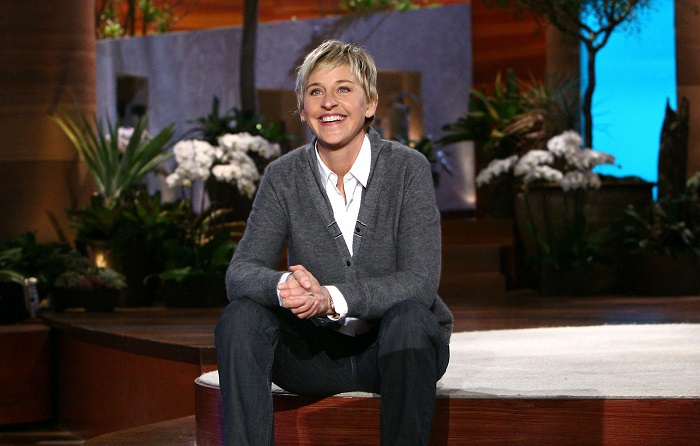 The celebrity host then added that she “can’t imagine” what it is like to wait and hope to get food. “It’s overwhelming” and heartbreaking, she explained. This is why she and Portia de Rossi have reportedly decided to “personally” donate $1 million to the initiative.

Ellen DeGeneres also stated that she has already donated to some of her “favorite charities,” including Direct Relief. Despite not wanting to reveal her “personal donations,” she reportedly said that she is “hoping” that this “inspires” people in positions to help.

Donate to co-host on The Ellen Show

Alongside the couple’s participation in the All In Challenge, Ellen DeGeneres also announced that she will grant “one lucky fan” the chance to co-host with her on her show. She stated that she would choose the winner from those who donate “at least $25” to the same challenge.

As explained, the winner will reportedly “spend the day at the studio.” Aside from learning the process of production, the fan will also be by the celebrity host’s side when she does her monologue and interview. Accordingly, the fan will get to meet some “A-list celebrities” on that day.

At the end of her announcement, she passed on the nomination to her friends. These mainly included Laura Dern and Justin Timberlake.