Bethesda revealed its season pass for Fallout 76 through its 2020 roadmap.

According to their Inside The Vault blog, the game will have seasons, giving exclusive rewards and trinkets to willing players. Fallout 76 will have its first “76 Seasons” pass this summer at no cost to existing players.

The season will have a board game theme, having the player jump a rank at a time through 100 ranks. There will also be added content for the game, including a rebalance of the combat system. Fans can also expect a Brotherhood of Steel questline and an updated story arc.

From the looks of FO76’s upcoming calendar, the arrival of season passes marks a new period in the game’s history. Until today, the game has relied on microtransactions for consistent monetization. Adding seasons underscores newfound confidence of the studio in their content.

The addition of seasons gives the game some of the extra attention it needs. The first summer season will have everyone on equal footing to test the game. Everyone can try to earn ranks and even get a special end-of-season bundle. 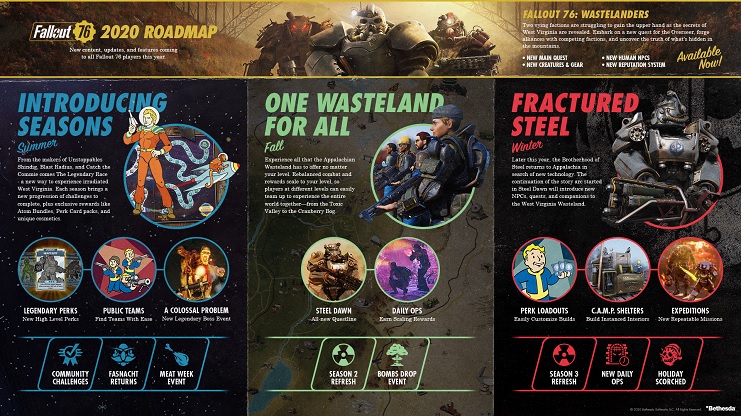 Players can wade through the ranks by doing challenges and conditions. Much like how passes work on Call of Duty and PUBG, Appalachia will offer more things to do. Tasks can be as simple as leveling up to as complicated as finishing specific quests.

After the first two weeks, players lagging behind in ranks can buy each rank for 150 atoms. This much atoms should be equivalent to $1.50, which is fair for people who want to spend.

Every season will last around 10 weeks each, with every year having as much as four seasons.

Will Fallout 76 offering its season pass, more players can have better, more tangible goals in-game. Even then, many of the supposed activities are there to make players do something. Rather than offer meaningful progression, the pass is there to reward people playing.

The game’s newfound push comes from the newest Wastelanders update. The much-awaited improvement recreated much of the game. It added back NPCs, quests, and redid all the balances.

There's a lot more to come to #Fallout76!

Take a look at our latest Roadmap, showing all the new features coming to you.
More info here: https://t.co/kekyQWiyND pic.twitter.com/B6hp2VLM65

The update also removed many of the game-breaking bugs FO76 was suffering throughout its duration. While there are still reports of some issues like NPCs taking player items, the game is running smoother now.

Fallout 76 will have its “Seasons” pass starting Update 20. The pass will come along with extra perks, including public teams and a new legendary boss.