Fallout’s cheeky mascot, Vault Boy, is coming to Super Smash Bros Ultimate. The ever-smiling icon will be a Gunner-type Mii Fighter along with his trusty alien blaster.

Super Smash Bros. Ultimate is bringing the most iconic video game characters out there. So far, the brawler added Persona 5’s Joker and Sans from Undertale. Min Min from Arms is also coming soon as a DLC character.

Vault Boy has a dark secret under his cheeky grin

Vault Boy is among the most iconic characters in gaming. The blond-haired, toothy-grinned boy is the poster child for Fallout. He is the mascot of Vault-Tec, the company responsible for the Vaults in the game.

Vault Boy is part of the propaganda efforts for the company. During the years before the bombs dropped in Fallout, Vault-Tec was a clean-cut corporation. They are the typical ultra-capitalist business from the 50s in-game.

Every ad from Vault-Tec in Fallout had Vault Boy in them. Many hold that cheesy, 1950s condescending tone meant to appeal to Americans of 2077. Beneath the smiles, however, was a horrific secret hidden in their underground bunkers.

Many of Vault-Tec’s Vault bunkers are not there to save humanity from a nuclear apocalypse. They are secret government experiments that test the extent of human resolve.

Within these horrific vaults lie posters of Vault Boy plastered all over. He accompanies the player in everything and is also the player avatar in the game’s menu.

Now, fans can use Vault Boy as their Mii gunner skin. He fits right in a game full of colorful characters and iconic heroes.

Vault Boy one of many new Smash Mii skins

The addition of Vault Boy in Super Smash Bros Ultimate is a tenuous one. At the moment, there is only one Fallout title in any Nintendo platform. The game is Fallout Shelter, a spinoff simulation where players handle their Vault. 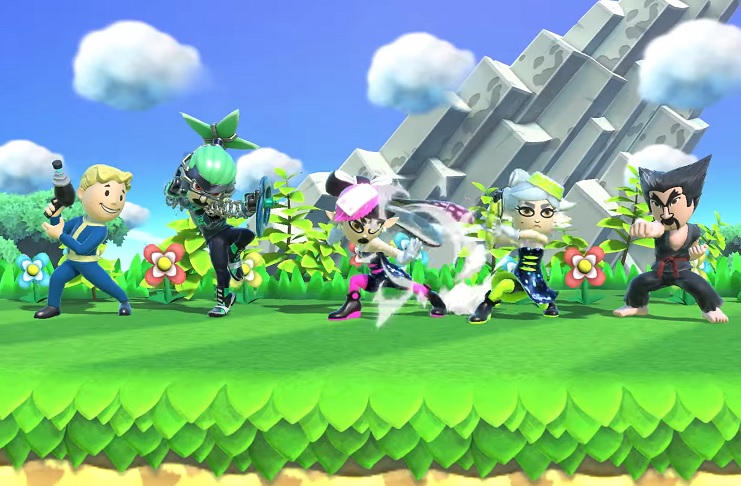 It seems his addition is more of a long-standing homage, if anything else. His techniques are no different than the standard gunner in Smash. Even then, seeing an eternally grinning Vault Boy smack Nintendo characters around would feel cathartic.

Vault Boy is ready to fight with the trusty Alien Blaster in hand. He’s also wearing his Vault 111 vault jumpsuit, paying homage to Fallout 4. Many other video game characters are coming to Smash, either as Mii costumes or new characters.

For starters, Ninjara from Arms and Heihachi from Tekken will come as Mii brawler costumes. Callie and Marie from Splatoon are also coming as brawler and gunner respectively.

Min Min from Arms is also coming soon as a DLC character for Super Smash Bros Ultimate. Vault Boy and other Mii Fighter skins will be available starting June 29.

Games that fans want to see on the next Nintendo Direct