The Monetary Authority of Singapore (MAS) has issued a warning about a new Bitcoin scam website that is fraudulently claiming endorsement by the country’s former Prime Minister.

The website strongly implies that Goh Chok Tong, who served as the country’s Prime Minister from 1990 to 2004, uses and endorses its Bitcoin investment scheme. 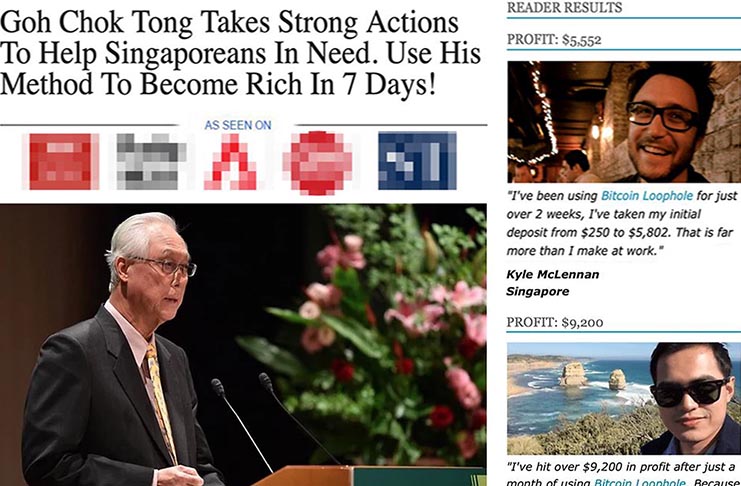 Using stolen branding to imply association with a legitimate news service, the website declares “Goh Chok Tong Takes Strong Actions To Help Singaporeans In Need. Use His Method To Become Rich In 7 Days!”

According to the warning on the MAS website, the quotes attributed to Tong “are either false or have been taken out of context and used in a misleading way.”

The scam website even goes so far as to imply that Tong – who is well known as a proponent of digitalization – has direct involvement in the platform, saying “That is why he has introduced revolutionary digital innovation.”

Anatomy of a Bitcoin scam

Like most HYIP (high yield investment program) scams, this particular Bitcoin scam works by convincing people to make an initial minimum investment of SGD$250 (AUD$265) on a platform called Bitcoin Loophole, which will supposedly then make trades on the investor’s behalf.

The platform itself promises would-be investors that they will earn $13,000 in twenty-four hours “guaranteed” and boasts that members of its “exclusive” investment group are “living it up in exotic locations in every corner of the globe.” 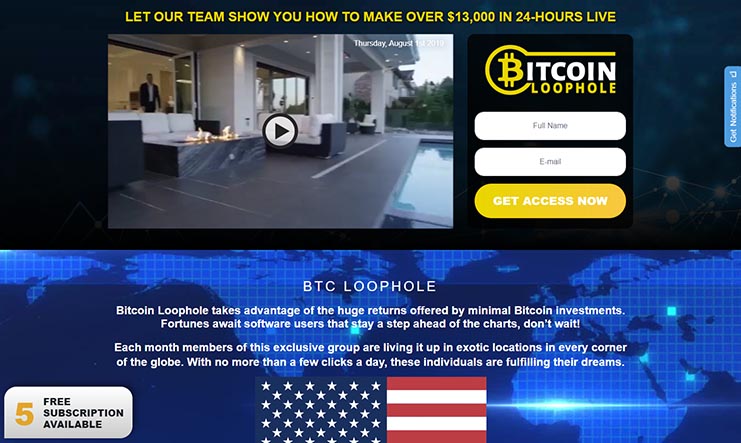 MAS notes that the platform asks users to provide credit card or bank account details and advises extreme caution, warning people not to provide any personal or financial information.

The rise of celebrity ‘endorsed’ scams

A number of cryptocurrency scams have emerged over the past year that use the images and identities of celebrities, politicians, and other public figures – coupled with the promise of massive rewards – to lure in victims.

Early last month, a Bitcoin scam used Wolverine himself, Hugh Jackman, in their promotion, claiming that the movie star had quit acting to invest in Bitcoin.

The criminal scheme pushed potential windfalls as they noted, “Hugh has announced that he is expecting to double the value of his investment in just half a year.”

Sir John Key, the former prime minister of New Zealand, was also used to promote another crypto scam boasting that the politician had invested AUD$500,000 in a crypto operation that would “earn thousands of dollars daily.”

Even the Libra, Facebook’s cryptocurrency, is being used in a scam that purportedly sells Libra tokens to users in exchange for Bitcoin or Ethereum – although Libra has NOT been released yet and will not be until at least early next year.

Whether in traditional finance or cryptocurrency sectors, one crucial piece of advice given to investors is to use extreme caution when investing. Do your due diligence and watch out for get-rich-quick schemes – particularly those that promise large returns in a short period of time.