Organizers of the E3 video game convention have announced its cancellation for 2020 due to the ongoing coronavirus outbreak.

The coronavirus (COVID-19) outbreak continues to wreak havoc on conventions, conferences, music tours, and athletic games around the world.

The latest casualty is the Electronic Entertainment Expo (E3), the premier trade event for the video game industry. 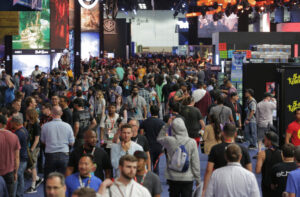 No gaming madness this year at E3

E3 2020 was slated to take place from June 9 through June 11 in Los Angeles, but the organizers announced today the event was being canceled.

After careful consultation with our member companies regarding the health and safety of everyone in our industry – our fans, our employees, our exhibitors, and our longtime E3 partners – we have made the difficult decision to cancel E3 2020, scheduled for June 9-11 in Los Angeles.

Following increased and overwhelming concerns about the COVID-19 virus, we felt this was the best way to proceed during such an unprecedented global situation. We are very disappointed that we are unable to hold this event for our fans and supporters. But we know it’s the right decision based on the information we have today.

The convention will be releasing details on refunds soon, and the organizers are working on creating an online experience to showcase the gaming industry announcements that make up the major buzz of the event.

There were going to be some notable exhibitors at E3 2020, such as Bethesda, Capcom, Nintendo, Warner Bros., Nvidia, Take Two Interactive, Oculus, and Sega. Sony had previously announced it would not be attending.

The cancellation of E3 2020 is just the latest notch in events scuttled by the coronavirus outbreak. It was just a few days ago when the SXSW festival was canceled after the city of Austin decided to cancel the dates for the festival. This was a major economic loss to the city as 2019 saw the festival bring in US$355.9 million [$AUS536.2 million].

In the United States, the upcoming March Madness basketball tournament has been impacted by the coronavirus outbreak. NCAA President Mark Emmert announced that all championships, including the 2020 men’s and women’s NCAA Tournaments, will be played without fans in attendance.

Emmert said, “I have made the decision to conduct our upcoming championship events, including the Division I men’s and women’s basketball tournaments, with only essential staff and limited family attendance. While I understand how disappointing this is for all fans of our sports, my decision is based on the current understanding of how COVID-19 is progressing in the United States.”

The action taken by the NCAA president will have a severe impact on local economies where the games will be held. In 2018, the city of San Antonio estimated the total economic impact of the Final Four would be over $346,649,046 [$AUS534,284,281 million] (including multipliers).