The Gears Tactics launch trailer has been released and is expected to give players a glimpse of what’s to come in this turn-based action game.

Gears Tactics is a spin-off of the Gears of War franchise and is set for release on April 28. The game was co-developed by The Coalition and Splash Damage and will be published by Xbox Game Studios.

The two-minute clip gives players a quick overview of what to expect from the upcoming title, including a few story elements, some character introductions, a quick look at the reward system, and a brief rundown of the game’s mechanics.

The trailer also made sure to highlight the fact that the game will have no microtransactions whatsoever. So those rewards are going to have to be earned.

Rise Up And Fight!

Pre-install #GearsTactics on PC now, and get ready to take on Ukkon from April 28th on Steam, Xbox Game Pass for PC (Beta) and Windows 10. pic.twitter.com/IAYM4OwIAg

The Gears of War series has always been known as a cooperative cover-based third-person shooter featuring manic gunplay and an engaging campaign that can be played with friends.

In a surprising move, Gears Tactics gives up the third-person perspective in favor of turn-based strategy mechanics, which is very similar to the sci-fi action game XCOM. It will also be the first single-player only entry in the Gears of War series so far.

Gears Tactics is attempting to set itself apart from other strategy games by staying true to the adrenaline-fueled, fast-paced gameplay that made the previous games so successful in the first place. 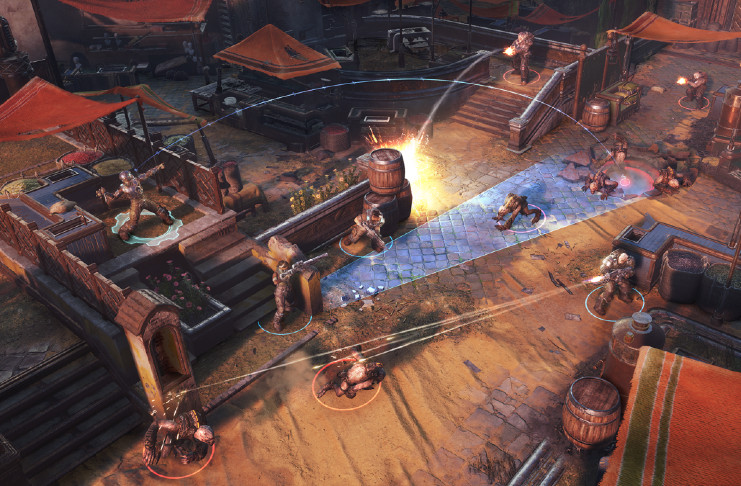 Unlike other games in the genre, there will not be a grid where players micromanage their “Gears,” which in the Gears of War universe, are the infantry or soldiers.

During their turn, Gears will instead be able to freely move across the battlefield using three simple commands allowing them to either move, attack, or use their individual skills.

As with most strategy titles, players can expect a few RPG elements to be thrown in such as the ability to level up characters in order to unlock their skills and abilities.

When it comes to character classes, there will be five to choose from, each with their own signature weapon, and a total of 30 skills between them. Weapons and armor will also have some customization options that will allow players to strengthen the item’s stats or imbue it with different skills.

‘Gears of War’: the prequel

According to the developers, Gears Tactics will be canonical to the series’ overarching storyline and will take place 12 years prior to the first Gears of War.

The game’s plot will revolve around Gabe Diaz, the father of Kait Diaz, who fans may recognize as one of the main characters in Gears 5.

The upcoming game reportedly delves deeper into Kait’s origins which should be pretty interesting especially for those who enjoyed the fifth game.

Gears Tactics will make its PC debut on April 28 but is also expected to launch on the Xbox One in the foreseeable future.