Contrary to its April report, the International Monetary Fund (IMF) now sees a sharper decline in global economic growth as countries all around the world struggle to recover from the pandemic’s aftermath.

The global recession, according to IMF’s April report, appears bearable with a predicted three-percent decline. But, due to the unprecedented series of unfortunate economic events and continuous proliferation of coronavirus globally, the organization now expects a deeper economic downturn.

On Wednesday, June 24, the IMF released its newest forecast for the global economy. Per the report, global gross domestic product (GDP) is said to incur a sharper drop and longer-than-before recovery.

Based on the report, it seems like global economies need a foolproof plan to avoid their finances to hit rock bottom. The International Monetary Fund said expectations for 2021’s global economic growth is down from 5.8% to 5.4%. The worldwide GDP is also expected to contract 4.9% in 2020, higher than the previous 3% forecast.

In the United States, the country’s GDP is likely to drop eight percent this year, lower than the 5.9% decline the organization reported last April. It may, on a lighter note, grow by 4.5% next year. 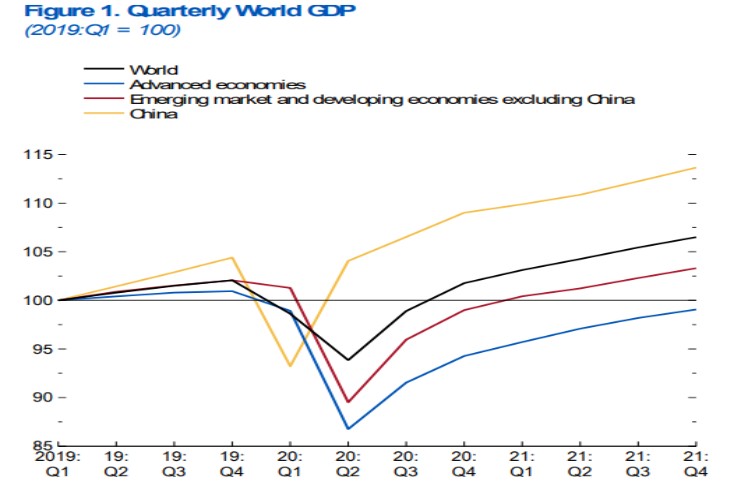 In the U.K., its GDP is likely to suffer a 10% slump (previously 6.5%) and may recover slightly (6%) in 2021. But IMF’s data shows that the U.K. has a better chance of immediate recovery than France, Spain, and Italy, which are all reported to have a severe decline in their average gross domestic product.

It is said that the organization’s managing director Kristalina Georgieva had already warned about April’s forecast implications and that she expected the path ahead for global economies was worse.

“The COVID-19 pandemic has had a more negative impact on activity in the first half of 2020 than anticipated, and the recovery is projected to be more gradual than previously forecast,” the IMF wrote.

Additionally, it looks like emerging, and developing countries have the upper hand in the battle against the pandemic. Based on the IMF’s report, advanced economies are predicted to have their GDP dropped by eight percent, while emerging economies are expected to fall by three percent only.

The global recession is also expected to affect the global labor market significantly. According to IMF, the labor market worldwide will suffer severely, citing job loss equivalent to over 300 million full-time jobs in the second quarter.

The organization also mentioned “uneven” income losses across genders, pointing women in low-income households to bear the recession more in some countries.

“One of the things that’s going to be a drag on the economy broadly and one of the reasons I think there’s going to be a headwind, is all businesses are learning and seeing ways where there are efficiencies. I think that is going to have a toll, and an adjustment on workforces more broadly as we get into 2021.”

Solomon also explained that the pandemic has likely two main periods that will prompt the future of the workforce—one is a “period of crisis” and the other is a “period of normalization.”