Just a few days later, the so-called “looter-slasher” made another appearance at PC Gamer’s Live PC Gaming show event, where it revealed off first-ever footage of Godfall running on PC.

Tune into the PC Gaming Show today at 11:00 AM PST to see the world-first gameplay of Godfall running on PC!

A good look at Godfall on PC

Gearbox’s two and a half minute gameplay trailer gives fans an in-depth look at what the action-RPG currently looks like running on PC hardware, including a few glimpses at Godfall’s combat, environments, and different armor sets called Valorplates.

Narrated (in a slightly awkward manner) by Game Director Keith Lee, it was made clear during the beginning of the video that the title is still in development, so improvements to visuals and performance are expected towards the game’s release.

Lee reiterated what’s already known about the game’s story, such as how the game world was split into four realms according to different elements, and how gamers will fulfill the role of a Valorian knight, known for their ability to don legendary Valorplates.

The video’s description also mentions the game’s villain, a mad god by the name of Macros, awaiting the Valorian knights at the topmost realm.

As for the game’s weapons, the PC trailer cycled through footage of the protagonist using a spear, a one-handed sword, twin short swords, and a giant hammer. Gearbox also gave fans a look at Godfall’s shield, which apparently can be thrown as a ranged weapon.

Gearbox’s looter-slasher isn’t quite done, and it shows

Through the course of the trailer, Godfall’s graphics seem inconsistent, with some clips looking more polished than others. This could be because the clips were taken from different stages in the game’s development, with the earlier builds looking a bit less defined.

The game’s combat animation and overall framerate also look like they need more polish, as the character movements aren’t nearly as fluid as some of the more high profile third-person action titles, such as God of War and Devil May Cry 5.

Although, as Lee said at the beginning of the video, Godfall is still in development, so hopefully the developers can iron out the more serious kinks before the game’s launch. 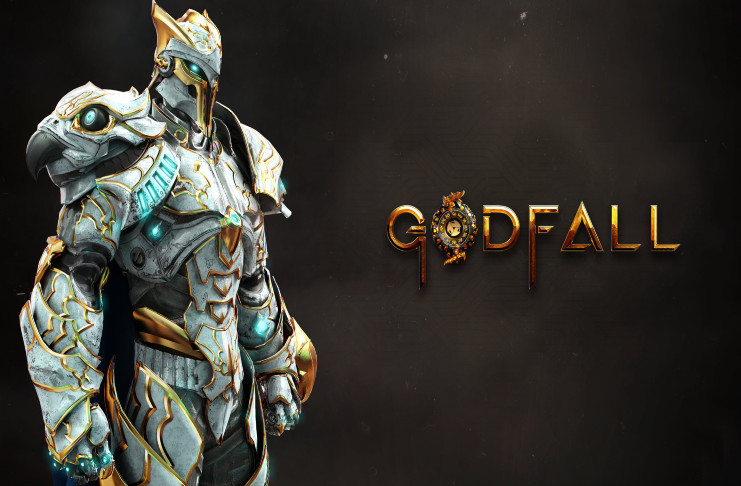 Gearbox and Counterplay’s aspirations with Godfall

Lee and his team believe that by marrying the loot-based mechanics of action-RPGs with an intricate third-person melee combat system, they’ve managed to create an entirely new genre they’re calling the “looter-slasher.”

That being said, what the developers over at Counterplay Games want to achieve with Godfall, is the perfect balance between loot farming and skill-based combat mastery.

While loot-driven titles aren’t new by any stretch, one that focuses mainly on skill-oriented third-person melee action seems to be a fairly new idea. Godfall might just be on to something here.

Images [1] and [2] courtesy of PlayGodfall/Twitter