A screenshot of the new feature shows the usual “Google Duo” logo in the top-right corner and a preview of your feed at the bottom.

The move seems to be part of Google’s strategy to add more features to the video-calling bandwagon, enhancing the way people can connect and work during the pandemic. Releasing Google Duo is a very good marketing strategy.

After announcing Chromecast support for Google Meet, the giant company has now revealed that it owns the company’s consumer video chat app, Duo.

The Google Duo will be coming to Android TV in the form of a native application that lets users start video calls from their television screens. 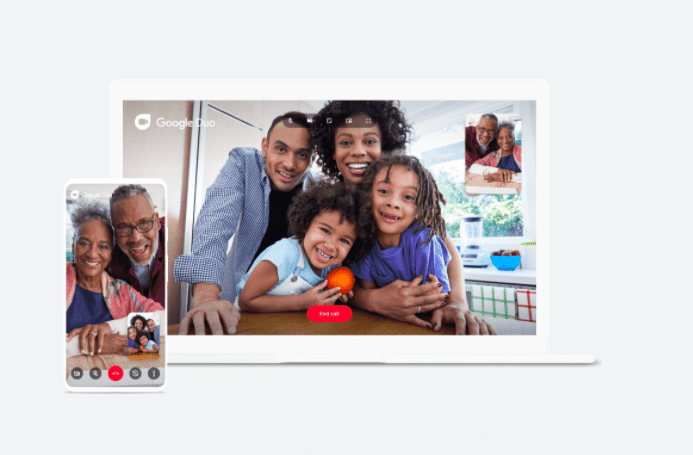 Google Duo will soon be coming to Android TV in beta. As reported by The Verge, a beta of Google Duo for Android TV will be released “in the coming weeks.” Because of this upgraded feature, you’ll be able to initiate video calls from your TV screen via Google Duo directly.

Earlier this month, Google added support for Chromecast on Google Meet. The search giant seems to be aiming to increase the efficiency of its video calling apps, with people relying on virtual methods to connect more than ever.

Google revealed this new feature in a blog post, saying that the big screen wasn’t just for work meetings. The tech company also mentioned that it aims to make video calling to family and friends better, too.

Google Duo on Android TV will allow you to initiate one-on-one and group calls directly from your TV screen. If your TV doesn’t have a built-in camera, you can plug in a USB camera for the video calls.

Google Meet and Google Duo are two different platforms and applications. However, like Meet, Duo is already supported on Nest Hub, Nest Hub Max, and other smart displays that run Google’s software.

They have the same goal – to promote better quality meetings and conferences while in lockdown. As you might imagine, Google is characterizing this more as a solution for everyday conversations than the work-oriented Meet. This new app is for catching up with friends and family when you’d rather not hold your phone or sit at your computer.

The expansion of platforms and ways of using Meet can only help Google as it continues to scrap it out with Zoom and Microsoft Teams. And it’ll be a protracted effort; as the company says at the end of its blog post, “video calls aren’t going anywhere” anytime soon.