Just when you think ransomware gangs couldn’t stoop any lower, they devise this new trick to force users to pay a 300 Bitcoin ransom.

Ransomware authors have never been known for their integrity and kindheartedness.

As you read this, a ransomware gang is demanding $14 million to decrypt the files of more than 100 nursing homes across the United States.

One reason they target hospitals is because they often feel they have to pay, or they will see lives lost or people get sick.

But businesses sometimes try and tough it out, encouraged by experts who say paying a Bitcoin ransom only encourages further attacks. After all, it’s only money.

But now the criminals behind Maze ransomware have devised a new trick to ramp up the pressure and force businesses to pay ransoms: the threat of releasing confidential information publicly.

Last week they dumped 700 MB of data stolen from security staffing firm Allied Security onto the internet as a way of increasing pressure on the company to pay up.

It’s a move reminiscent of cutting off part of a hostage victim’s ear to prove how serious you are,

The company has more than 200,000 staff and revenue over $200 billion but appears to have a policy of not negotiating with terrorists.

“We gave them time to think until this day, but it seems they abandoned payment process.

“I uploaded some files from their network as the data breach proofs.

“If they don’t begin sending requested money until next Friday we will begin releasing on public everything that we have downloaded from their network before running Maze.” 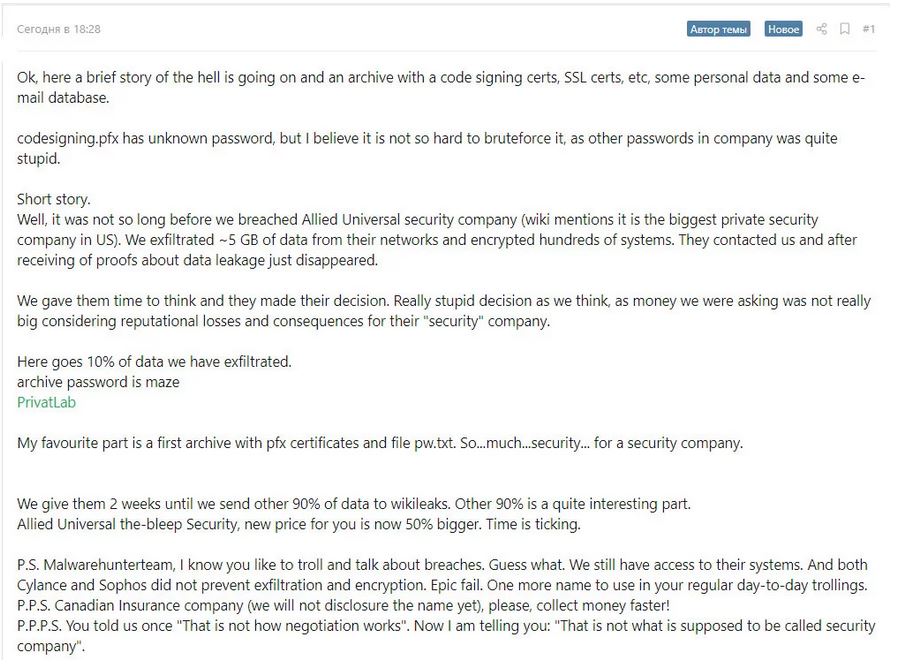 They demanded that Bleeping Computer publish a story on it (Abrams declined as he didn’t want to be used as leverage) and then published the 700 MB of stolen data when the deadline to pay the 300 Bitcoin ransom wasn’t met.

Allied Universal said it would pay no more than $50,000 and has not been negotiating.

Two weeks to pay before the data dump

The hackers have now given Allied Universal two weeks to pay up, or they will dump the entire 5GB trove of data they downloaded from the company onto Wikileaks.

Abrams wrote that the release of commercial confidential information was a significant development in the scourge of ransomware.

“For years, various ransomware families and affiliates have been threatening to publicly release stolen data if a ransom is not paid, but never have never gone through with the threat.

“With Maze’s actions, we may have reached another level where ransomware actors use the release of stolen data as leverage to get users to pay.”